Ignoring, abandoning the elderly is a sin, pope says 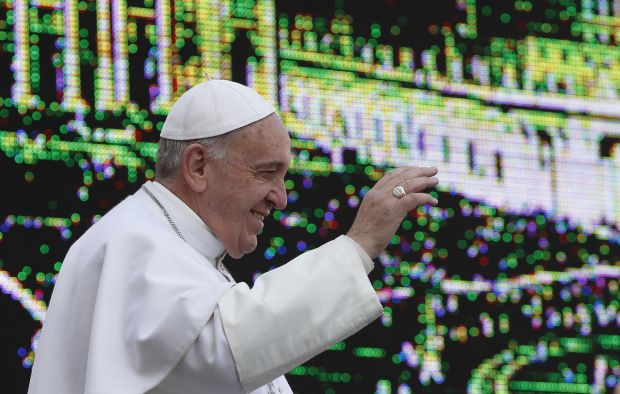 Pope Francis passes a video monitor as he arrives to lead his general audience in St. Peter's Square at the Vatican March 4. (CNS photo/Paul Haring)

VATICAN CITY (CNS) — Seeing the elderly only as a burden “is ugly. It’s a sin,” Pope Francis said at his weekly general audience.

“We must reawaken our collective sense of gratitude, appreciation and hospitality, helping the elderly know they are a living part of their communities” and sources of wisdom for the younger generations, the 78-year-old pope said March 4 at his weekly general audience.

Continuing a series of audience talks about the family, Pope Francis said he would dedicate two talks to the elderly, looking at how they are treated in modern societies and at their vocation within the family.

“If we do not learn to treat the elderly well,” the pope said, “we won’t be treated well either” when the time comes.

In a talk punctuated with references to his own family life, his grandmother and his experience visiting homes for the elderly in Buenos Aires, Pope Francis said even Christians are being influenced by cultures so focused on production and profit, that the biblical exhortations to respect the aged and draw upon their wisdom are being ignored.

“We elderly are all a bit fragile,” the pope said, changing his prepared text to include himself among the aged.

The elderly he visited in Buenos Aires, he said, would often tell him that they had many children and that their children visited them. “And when was the last time they came?” the pope said he asked one woman. “She said, ‘Well, at Christmas.’ It was August. Eight months without a visit from her children. Eight months of being abandoned. This is called a mortal sin. Understand?”

“It is so easy to put our consciences to sleep when there is no love,” he said.

“While we are young we are tempted to ignore old age as if it were an illness to hold at bay,” he said. “But when we become old, especially if we are poor, sick and alone, we experience the failures of a society programmed for efficiency, which consequently ignores the elderly.”

“We want to remove our growing fear of weakness and vulnerability, but doing so we increase the anguish of the elderly,” Pope Francis said.

The aged are the “reserve of the wisdom of our people,” they have experienced and survived the struggles to raise a family and provide them with a dignified life, he said. Tossing them aside means tossing aside their experience and the way that experience can contribute to making life better today.

A society that cannot show gratitude and affection to the elderly “is a perverse society,” the pope said. “The church, faithful to the word of God, cannot tolerate such degeneration.”

“Where the elderly are not honored,” he said, “there is no future for the young.”

Before the audience, Pope Francis met briefly with 60 bishops from 35 countries who were participating in a conference sponsored by the Focolare movement. Addressing the bishops from “the bloodstained lands of Syria, Iraq and Ukraine,” the pope assured them he is “united with them” each day in the celebration of the Eucharist. “In the suffering you are experiencing along with your people, you experience the strength that comes from Jesus in the Eucharist, the strength to go forward united in faith and in hope.”