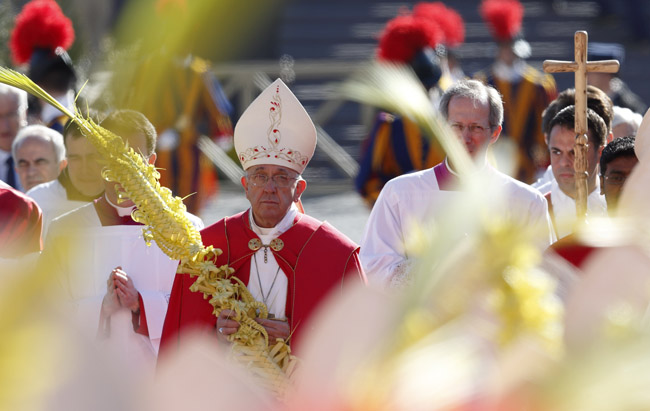 VATICAN CITY (CNS) — From modern-day martyrs to those who quietly care for the sick or elderly, Pope Francis remembered all those who “sacrifice themselves daily,” following Jesus in serving others and giving witness to the Gospel.

In overcoming the daily temptations of power and pride, the pope said at Palm Sunday Mass, Christians can look to those who, “in silence and hiddenness, sacrifice themselves daily to serve others,” whether that be a sick relative, an elderly person or someone with special needs.

Dressed in red vestments, the color of the Passion, Pope Francis remembered “our brothers and sisters who are persecuted because they are Christians — the martyrs of our own time. There are many of them! They refuse to deny Jesus and they endure insult and injury with dignity. They follow him on his way.”

The heart of the Palm Sunday celebration, the pope said in his homily, is a line from the Letter to the Philippians: “‘He humbled himself.’ Jesus’ humiliation.”

Humility and humiliation, he said, is “God’s way and the way of Christians,” even though it “constantly amazes and disturbs us. We will never get used to a humble God.”

However, the pope said, the entire history of salvation is filled with examples of God humbling himself to walk with his people and save them, even when they have been unfaithful to him.

“This week, Holy Week, which leads us to Easter, we will take this path of Jesus’ own humiliation,” he said. “Only in this way will this week be holy for us, too.”

Pope Francis urged Catholics to pay attention to the Bible readings throughout the week, noticing the contempt shown toward Jesus, the betrayal of Judas, Jesus’ arrest and condemnation, how the disciples run away and how Peter denies knowing him.

“This is God’s way, the way of humility,” he said. “It is the way of Jesus; there is no other. And there can be no humility without humiliation.”

The Bible says that in becoming human, Jesus took the form of a slave, the pope noted. Slaves serve others and that is exactly what Jesus did.

“The way of the world” sees humble service as ridiculous and, instead, it proposes “the way of vanity, pride and success,” he said. “The Evil One proposed this way to Jesus, too, during his 40 days in the desert. But Jesus immediately rejected it.”

Pope Francis urged people to draw strength and inspiration for their battle against pride from those who humbly care for others and, especially, from the modern-day martyrs.

At the end of the Mass, Pope Francis marked the local celebration of World Youth Day and asked Catholic youths around the world to begin now their preparations to celebrate the international World Youth Day with him in Krakow, Poland, in 2016.

“The theme of that large gathering — ‘Blessed are the merciful for they will be shown mercy’ — blends well with the Holy Year of Mercy” that he proclaimed for 2016. “Let yourselves be filled with the Father’s tenderness in order to spread it around you,” the pope said.

He also offered special prayers for the students who were among the victims of the Germanwings airplane crash in the French Alps March 24.