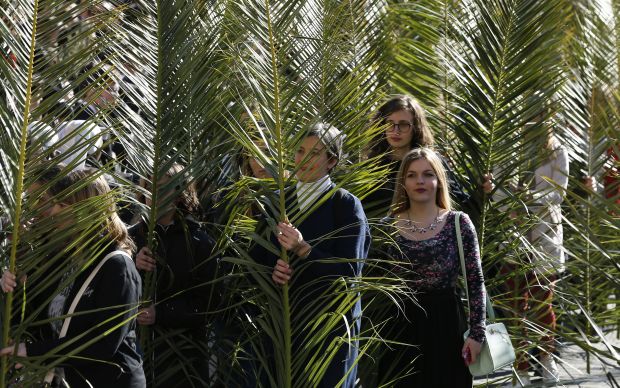 VATICAN CITY (CNS) — The Palm Sunday procession at the foot of an 85-foot-tall Egyptian obelisk in St. Peter’s Square recalls the martyrdom of many early Christians and the fast-thinking foresight of an Italian Renaissance sea captain.

Palm Sunday at the Vatican begins with a procession of young people carrying olive branches and large green palm fronds, followed by clergy holding tall, intricately woven palm leaves. The participants circle the base of the obelisk in the center of the square, while the pope blesses them with holy water.

Starting the ceremony in the center of the square recalls the martyrdom of the early Christians because the 2,000-year-old solid granite obelisk marks the center of a grand arena built in 37 AD by the Roman emperor Caligula. Later, emperors introduced the execution of Christians as a form of entertainment there and St. Peter was among those martyred in the arena.

To mark the place where many early Christians shed their blood, in 1586 Pope Sixtus V ordered that the same obelisk Caligula brought to Rome from Egypt be erected in the square.

Because the obelisk weighs 327 tons, it took 900 men and 140 horses working 44 winches to move and hoist it into place. Given the difficult and delicate nature of the task, Pope Sixtus forbade onlookers from making any noise as the obelisk was being pulled upright; those who failed to comply would face the death penalty.

According to tradition, Captain Benedetto Bresca, an experienced northern Italian seafarer, was watching in the square that day, and he saw the hemp ropes supporting the obelisk giving way from the excessive strain.

Defying the pope’s orders for absolute silence, Bresca shouted out in his Ligurian dialect, “Aiga ae corde,” that is, “water on the ropes” to make them shrink, become stronger and keep them from fraying and snapping. The workers did as they heard and the obelisk did not come crashing to the ground.

Though Bresca was arrested on the spot, Pope Sixtus immediately pardoned him and showed his gratitude by asking him what he would like to have as a reward.

According to legend, Bresca asked that he and his descendants be appointed the official supplier of the pope’s palm fronds. His wish was granted and he was allowed to fly the papal naval flag on his boat as it entered the Tiber River when he shipped the palm leaves from the Ligurian coastal city of Sanremo to Rome.

The long tradition of delivering palm fronds from Sanremo to be woven in Rome by Camaldolese nuns ended in the 1970s.

With the help of a palm tree research group, a cooperative in Sanremo revived the tradition in 2003 by supplying “palmurelli,” which are palm leaves braided and styled in intricate shapes and patterns.

The city of Sanremo typically sends more than 2000 handmade “palmurelli,” to Rome for the Palm Sunday procession.

NEXT: Way of Cross takes Jesus’ point of view to help others carry crosses