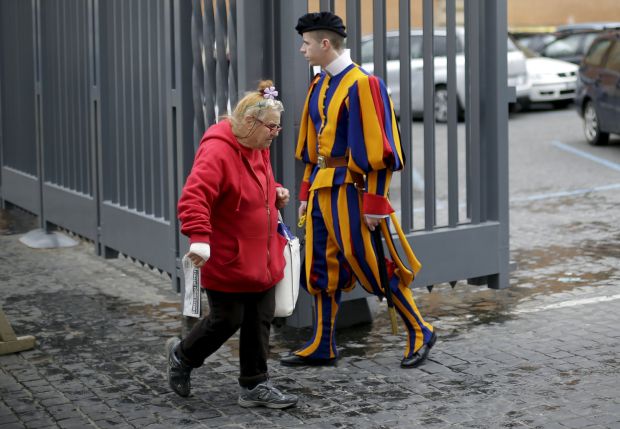 A homeless woman walks past a Swiss guard as she enters the Vatican March 26. While enjoying a private visit to the Sistine Chapel, homeless people were surprised by a visit from Pope Francis. (CNS photo/Max Rossi, Reuters)

VATICAN CITY (CNS) — While enjoying a private visit to the Sistine Chapel, a group of VIP guests — homeless people who live around the Vatican — were surprised by a visit from Pope Francis.

The 150 visitors had just reached the Sistine Chapel at about 5 p.m. March 26, when Pope Francis walked through the door.

“Welcome,” the pope said. “This is everyone’s house, this is your home. The doors are always open for all.”

The Vatican Museums had closed 90 minutes early to allow the special guests of Archbishop Konrad Krajewski, the papal almoner, to have the Sistine Chapel to themselves. Accompanied by professional guides, the visitors began their tour in the Vatican Gardens and the Vatican Museums.

Pope Francis thanked the archbishop for arranging the “little caress” for those who live on the streets of Rome.

“Pray for me. I’m in need of prayers by people like you,” the pope told them. He blessed them saying, “May the Lord protect and help you on the path of life and let you feel his tender, fatherly love.”

The pope greeted each of the guests individually, spending more than 20 minutes with them before they were served dinner in the museums’ cafeteria.

The Vatican press office said Pope Francis asked that no cameras be present during his meeting with the group. After he left, though, the guests posed for a group photo under Michelangelo’s towering wall fresco of “The Last Judgment.”

It was not the only photo taken; several of the guests had cellphones with cameras and they took pictures of one another and of the pope.

Mauro, who speaks Italian and serves a spokesman for a group of Poles who sleep near the Vatican press office, told Catholic News Service March 27 that his favorite part of the Vatican Museums was the vintage carriage and car collection.

“I’m passionate about cars and what they have is great,” he said. “I had my picture taken there.”

Mauro said he and his friends always see long lines of tourists waiting to get into the museums, so it was great to see what all the fuss was about. And they didn’t even have to wait in line or deal with a crowd; “it was just us,” he said.

The pope’s arrival, Mauro said, “was a big surprise. We applauded. Everyone was so happy.”

His friend Mario said he could not accept the invitation because he had nowhere to leave Cookie, a 5-month-old puppy he found abandoned in a dumpster. “He’s my baby,” said Mario.

As papal almoner, Archbishop Krajewski distributes charitable aid from Pope Francis and has made a special point of assisting the homeless who live near the Vatican. His office installed and manages the showers near St. Peter’s Basilica and recruited barbers and hairdressers to donate their services on Mondays.