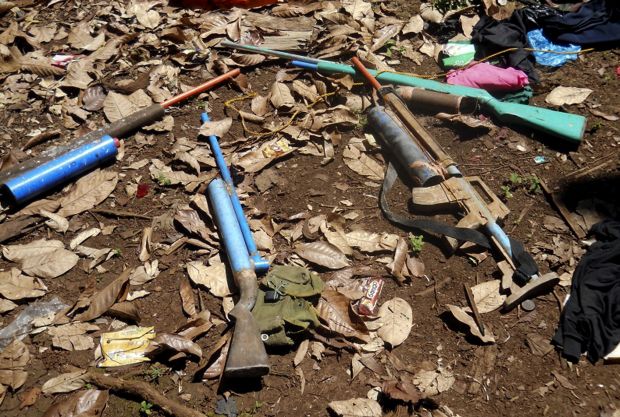 The United Nations High Commission for Refugees said March 20 that more than 120,000 residents fled their homes in towns throughout Maguindanao province on the island in the Muslim majority southern Philippines. The commission said a humanitarian crisis was looming as the number of displaced people was expected to grow.

“We visited and interviewed families who were just right there, under the trees,” said Sister Alejandra Villarosa, a member of the Oblates of Notre Dame based in Cotabato City, Philippines. “They had no basic necessities. … They are innocent victims. Their neighborhood associations just told them to vacate their homes because of the military operations against the BIFF (Bangsamoro Islamic Freedom Fighters).”

Since late January, the Armed Forces of the Philippines has stepped up its campaign to against the rebels that authorities believe are harboring internationally wanted terrorists.

The military campaign slowed for three days during the week of March 23 to allow about 16,000 students to attend graduation ceremonies, but residents remained away from their homes.

BIFF broke away in 2011 from the larger Moro Islamic Liberation Front, which is negotiating terms of a peace pact it signed with the government March 27, 2014.

Sister Alejandra told Catholic News Service that most residents had no food and that she saw a few people fleeing only with cucumbers they grabbed from their gardens.

She said she visited displaced families March 5 in rural Shariff Aguak. She added that members of her congregation joined the Religious of the Virgin Mary, Marist Brothers and Oblates of Mary Immaculate priests in assembling and distributing rice, canned goods and sleeping mats for about 200 families,

The displaced families are difficult to reach, Sister Alejandra explained, because the rebels were constantly moving with the military not far behind. Families “were scattered everywhere,” she said.

The government has provided basic goods and services but only to larger groups of people who are centrally located, she said.

“They’re in spontaneous settlements. People are piecing together bamboo sticks. Some of them have tarpaulins. Others are using blankets to protect themselves from the sun and rain,” he said.

CRS workers were preparing to bring in more aid after the number of families needing supplies in two communities the agencies were serving jumped from 2,300 to 3,500 by March 26.

“Usually for natural disasters, donors and even private donors are much more forthcoming based on the needs, but in conflict we often have a lot of difficulty raising external funds,” Curry explained. “So up to now we’ve been allocating CRS private funding to serve these first 2,300 families but if the needs go higher or longer, we’re going to be needing additional funds.”

The Philippine military chief has said operations against BIFF were expected to continue through June.