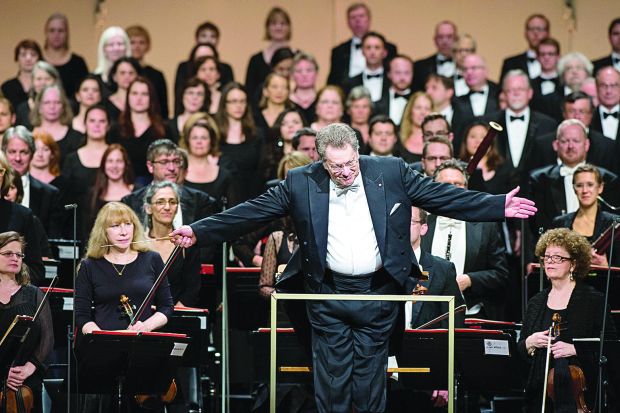 Sir Gilbert Levine acknowledges audience applause after conducting the May 5, 2014, "A Celebration of Peace Through Music" concert at DAR Constitution Hall in Washington. The concert celebrating the canonizations of St. John XXIII and St. John Paul II will be broadcast Good Friday, April 3, and Easter, April 5, on public television stations around the country. (CNS photo/courtesy of Georgetown University)

WASHINGTON (CNS) — A concert conducted last May in Washington by noted conductor Sir Gilbert Levine to celebrate the canonizations of St. John XXIII and St. John Paul II will air on public television stations in Washington, New York, Chicago and other cities around the country in time for Easter.

Church officials, members of Congress and the diplomatic corps, representatives of other faiths and others crowded DAR Constitution Hall for the concert titled “A Celebration of Peace Through Music ‘in Our Age.'”

The event was a joint effort of the Archdiocese of Washington, Georgetown University, WETA-TV and the embassies of Poland, Italy and Argentina. Public TV station WETA is broadcasting the concert in the Washington area.

The concert’s title was taken from “Nostre Aetate” (“In Our Age”), the Second Vatican Council’s Declaration on the Relation of the Church to Non-Christian Religions.

Levine — popularly known as “the pope’s maestro” because of his nearly two-decade friendship and collaboration with St. John Paul — conducted the Orchestra of St. Luke’s from Carnegie Hall, the 85-voice Krakow Philharmonic Choir, and the 180-voice Choral Arts Society of Washington.

In an interview at the time of the concert with the Catholic Standard, Washington’s archdiocesan newspaper, Levine said that the entire program was “very important” because it features works that “form a musical celebration of these popes.”

Washington Cardinal Donald W. Wuerl said then that the concert was an effort to “pick up where these two holy men left off,” and an opportunity to “focus on reconciliation, work with one another and get to know one another better.”

The WETA presentation includes not only the concert, but also follows Levine as he traveled to Buenos Aires, Argentina, Krakow, Poland, Rome and Venice, Italy, Vienna, Austria, and Washington to show how music and spirit can unite the world.

In addition to the televised broadcast, a radio version of the full-length concert will be made available to classical radio stations nationwide. More information about the radio broadcast can be found at www.wfmt.com.

NEXT: Aid groups stretched to help 120,000 displaced in southern Philippines