Welcome children, learn from them, pope says at audience 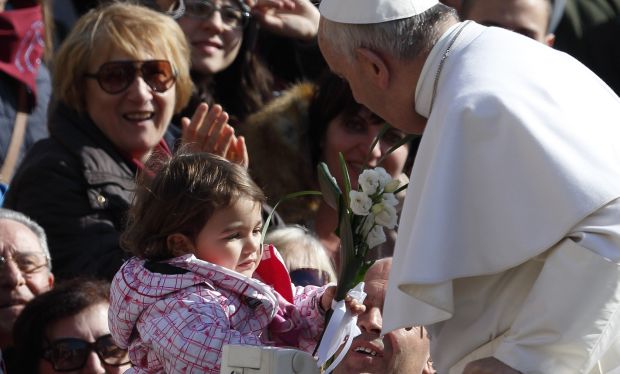 A girl presents flowers to Pope Francis as he arrives to lead his general audience in St. Peter's Square at the Vatican March 18. (CNS photo/Paul Haring)

VATICAN CITY (CNS) — Children are a blessing for humanity and for the church, bringing new life and energy to families and society, Pope Francis said.

Unfortunately, he said, too often children are society’s “great rejected ones, because they aren’t even allowed to be born!”

Continuing a series of general audience talks about the family March 18, Pope Francis said it was troubling that so many European countries have a birthrate so low that their populations are declining or would without immigration.

“Children bring life, happiness, hope — and even troubles, but that’s life,” he said. “Obviously they cause worries and sometimes problems, but a society with those worries and problems is always better than a society that is sad and gray because it has no children.”

Pope Francis, who spent more than half an hour kissing and blessing babies and children in St. Peter’s Square before the audience, said little ones are not diplomats and have not yet learned “the science of duplicity.” And they let people know exactly what they are thinking, sometimes to their parents chagrin.

“With their interior simplicity, they have the ability to give and to receive tenderness,” the pope said. “Children are able to smile and to cry. Some, when I reach out to embrace them, smile. Others, seeing me dressed in white, think I’m a doctor who’s come to vaccinate them and they cry. It’s spontaneous. Kids are like that.”

“Smile and cry — those are two things that we big people often block,” he said. “Many times our smile is a cardboard smile, something without life, artificial like a clown’s. Children smile spontaneously and they cry spontaneously. It’s a matter of heart, and adult hearts can be blocked and lose the ability to smile and to cry. But children can teach us to smile and cry again.”

Despite the fact that sometimes they can be naughty, the pope said, children “constantly remind us of the condition necessary to enter the kingdom of God: that of not considering ourselves self-sufficient, but needing help, love and forgiveness.”

They remind Christians that they are children of God, dependent on him for their lives and salvation, he said.

“Children remind us of another beautiful thing as well: We are always sons and daughters. Even when one is an adult or elderly, even when you become parents or have a position of responsibility, you are still a son or daughter,” he said. “This brings us back to the fact that we did not give ourselves life, but we received the gift of life. It’s the first gift we ever received.”

Those who act as if they are the creators and lords of their lives, he said, will never understand what it means to be a child of God and to trust him.