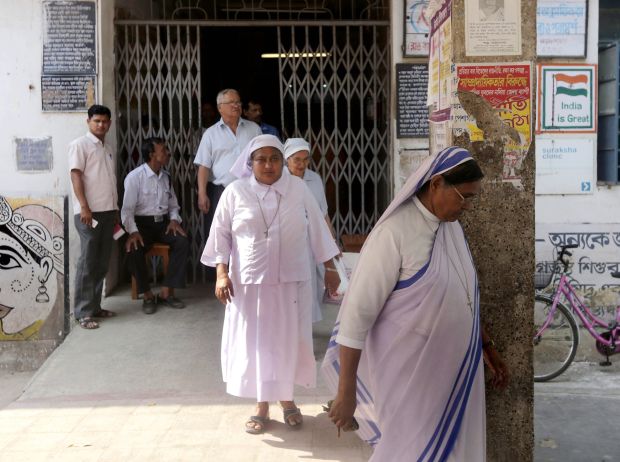 BHUBANESWAR, India (CNS) — Students at a Hindu-run school for the blind joined a nationwide outcry over the gang rape of a 74-year-old Catholic nun.

The 50 students at the Helen Keller School near the convent where the nun lived chanted “Mother we cannot see, but we can feel your pain,” March 17, after news of the incident three days earlier reached them, Bishop Joseph Gomes of Krishnagar, India, told Catholic News Service.

The show of solidarity by the students was part of a series of demonstrations throughout India calling on authorities to hasten their investigation and charge the 10 suspects being detained in connection with incident. 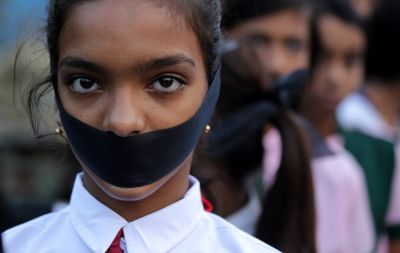 A student tapes her mouth shut during a March 16 candlelight vigil for an elderly nun who was raped in Ranaghat, India. (CNS photo/Piyal Adhikary, EPA)

“This is shocking. The people are disgusted,” Bishop Gomes said of the overnight attack in which a group of masked men broke into the Jesus and Mary Congregation convent in Ranaghat, about 45 miles from Kolkata.

Bishop Gomes said he visited with the hospitalized nun for a second time March 16 and that she had forgiven her attackers.

“She told me that ‘justice should be done. This should be never be repeated or happen to anyone else,'” Bishop Gomes said.

Mamata Bannerj , chief minister of West Bengal, faced angry students, parents and community members when she visited the convent and school complex to express solidarity with the nuns. Protesters detained her vehicle for an hour, according to media reports.

An estimated 6,000 demonstrators gathered in Kolkata March 16 to raise concerns with the Indian government.

“We are not satisfied because no headway has been made,” Archbishop Thomas D’Souza told the crowd.

“We urge the government to arrest the culprits at the earliest and ascertain the motive of such a heinous crime,” he said.

The archbishop noted that in addition to raping the nun, the perpetrators desecrated the convent chapel, threw consecrated hosts onto the ground and robbed the school office.

Archbishop D’Souza told CNS March 17 church officials could know if there was a conspiracy behind the incident “only if the culprits are arrested.”

In a March 15 statement, the Conference of Religious India, which represents 125,000 women and men religious and priests, described the attack as a “horror.”

“What fellow human beings did to a frail, ailing, elderly woman of God makes me feel ashamed as an Indian, and heartbroken as a human being,” said the statement, issued by Salesian Father Joe Mannath, conference national secretary.

“The gang rape of an old religious woman is beyond all normal descriptions of human depravity,” the statement said.

“That others care and have protested against this despicable act shows the concern and revulsion any decent human being would feel at such an act of savagery,” it added.

NEXT: Welcome children, learn from them, pope says at audience