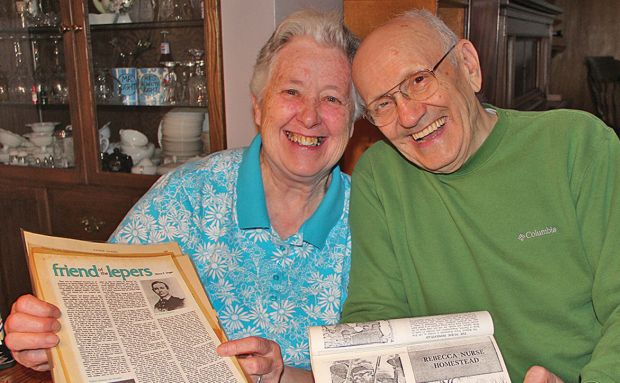 Pat and Jerry Nurss of Oil City, Pa., display some of the reams of documents and photographs about their family lineage April 8, which includes a saint and a seventh great-grandmother hanged for witchcraft. (CNS photo/Mary Solberg, Diocese of Erie)

OIL CITY, Pa. (CNS) — The roots of Jerry Nurss’ family tree are tangled up in the infamous Salem witch trials. But his wife, Pat, shares her bloodline with a saint.

The Oil City, Pennsylvania, couple — who will celebrate their 55th wedding anniversary in August — quip that their disparate backgrounds have kept them together all these years.

“If you go back a couple of centuries or more, people definitely wouldn’t talk about the witch connection, but today when we mention it to anyone, we make a joke out of it,” says Jerry, whose seventh great-grandmother, Rebecca Nurse (original spelling), was hanged for witchcraft on July 19, 1691.

“I’m protecting him,” teases Pat, whose second cousin is St. Damien of Molokai, the Flemish-born priest who ministered to lepers in Hawaii in the late 19th century.

Jerry Nurss learned about his seventh great-grandmother’s hanging through genealogical research done in England in the 1950s.

According to historical reports, Rebecca Nurse was a 71-year-old widowed mother of eight who was falsely accused for instigating the odd behavior of several young girls in Salem Village, now Danvers, Mass. The town doctor bowed to Puritanical fear, concluding that the girls’ “horrid fits” were a direct result of witchcraft.

Rebecca Nurse was dragged from her bed chamber and put on trial. Forty neighbors signed a petition recommending she be released; her children fought for her life. Initially, a jury found Rebecca innocent, but then it reversed its decision after her accusers began to experience “terrifying torments.”

Rebecca Nurse was hanged on a summer day in 1691. Her children secretly buried her in an unmarked grave, but 200 years later, her progeny erected a memorial in the family graveyard, now known as the Rebecca Nurse Homestead.

Jerry and Pat Nurss, both in their 70s, traveled to Salem in 1993 to see the homestead and mark the 300th anniversary of the end of the Salem witch trials.

“I don’t believe she was a witch any more than I believe I am,” Jerry says. “It’s not an honor that she was hanged, but I still feel honored that I am part of her family; it’s my bloodline.”

Pat Nurss also is proud of her family heritage. But hers isn’t as difficult or controversial as her husband’s.

According to Pat, her grandfather’s first cousin was Joseph DeVeuster, known today as St. Damien of Molokai. He was canonized in Rome Oct. 11, 2009. Pat Nurss is St. Damien’s second cousin.

“I feel very honored. He must have been a really kind-hearted person to live his life helping other people,” Pat says.

Joseph DeVeuster was born Jan. 3, 1840, in the hamlet of Tremeloo, Belgium. When his older brother came down with typhus and could not leave for mission work in Hawaii, the young Joseph offered to go instead. He reached Honolulu in March 1864 and two months later was ordained a priest — taking the name Damien — with the Congregation of the Sacred Hearts of Jesus and Mary.

Eventually, Father Damien developed a keen interest in helping those with Hansen’s disease, or leprosy, at a settlement at Kalawao on the island of Molokai in Hawaii. The peninsula, surrounded by rough seas and 2,000-foot cliffs, had become an ideal place for isolating people with leprosy.

Father Damien offered hope to lepers, helping them build houses, plant trees and construct a water system, according to family archives. He pushed the Hawaiian government and his church for supplies and resources, attracting worldwide attention.

“I feel so blessed to be related to St. Damien,” Pat Nurss says, looking at her husband. “It’s so amazing with his great-grandmother accused of witchcraft and my cousin a saint.”

Solberg is editor of FaithLife, newspaper of the Diocese of Erie, Pennsylvania.