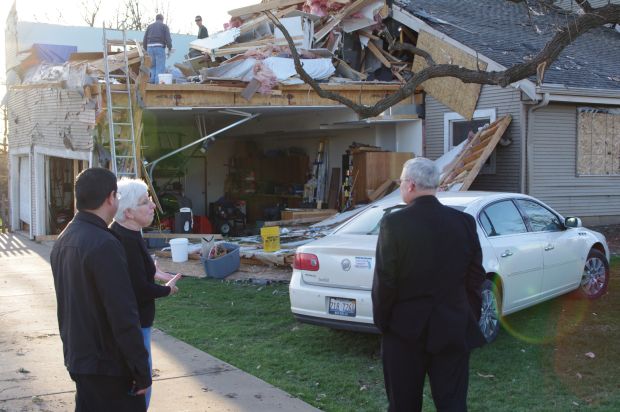 Cecilie Schwartz talks to Father Johnson Lopez, pastor of St. Patrick Parish in Rochelle, Ill., and Bishop David J. Malloy of Rockford, Ill., April 11, the EF4 tornado that damaged her home and 29 others in her neighborhood the night of April 9. (CNS photo/Penny Wiegert, Catholic Observer)

A massive tornado, measuring EF4, touched down near Rochelle, which is about 25 miles south of Rockford, damaging or destroying about 50 homes and other buildings. In nearby Fairdale, all 72 buildings there were damaged or destroyed, according to some reports.

At least two people were killed and more than a dozen others were treated for injuries at local hospitals.

“Bishop Malloy leads through example. … We continue to keep all families affected by the storm in our prayers,” Laura Rios Ortiz said in a posting on the diocese’s Facebook page.

The bishop asked all parishes in the Diocese of Rockford to take up a second collection for tornado victims during Masses April 11 and 12.

He requested the parishes send the funds collected directly to the diocesan administrative offices as soon as possible “so funds can be disbursed immediately to provide direct assistance for the material needs of all those people who experienced extreme damage and/or displacement.”

“Your generosity combined with your prayers of compassion and solidarity as we enter the 2015 storm season are greatly appreciated,” he said.

On April 11, the Northern Illinois Food Bank picked up thousands of packaged meals put together by University of Illinois students during their Community and Campus Day of Service and donated by Gov. Bruce Rauner. Working with the American Red Cross, the food bank planned to deliver the packaged meals to food pantries in Rochelle and Kirkland.

The Chicago Cubs announced staff members would collect donations for tornado victims at Wrigley Field gates before the team’s April 14 night game against the Cincinnati Reds.

NEXT: Laity called to be on ‘frontlines’ of using media in new evangelization