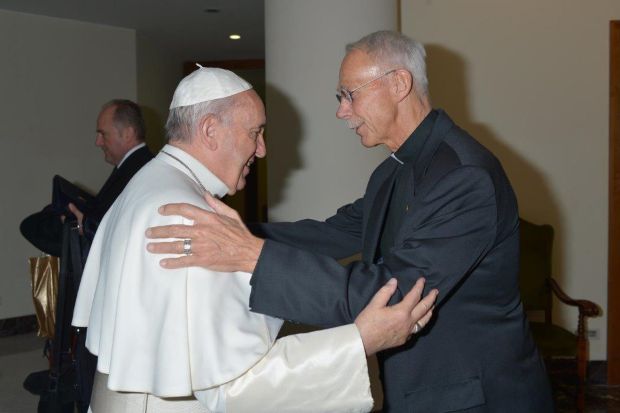 Diagnosed with inoperable pancreatic cancer in mid-January, he was given the unsettling news by doctors that he likely has a four-to-six month window before the disease further ravages his body and takes its toll on him.

A self-described “Easter person,” however, the 71-year-old priest is making the most of that window of time.

And what better way to experience perhaps his last Lent, than with a visit to the pope.

Thanks to some strings pulled for him by a Milwaukee native serving in Rome, Cardinal James M. Harvey, Father Schlegel was one of 12 priests who concelebrated morning Mass with Pope Francis in his private chapel March 26. Former prefect of the papal household, Cardinal Harvey is now archpriest at the Basilica of St. Paul Outside the Walls.

During the Mass, it seemed as if Pope Francis was speaking directly to Father Schlegel. The words the pope uttered in his homily in the Domus Sanctae Marthae spoke to his heart.

Cold doctrine doesn’t bring joy, rather joy comes from faith and the hope of meeting Jesus, the pope told the intimate crowd of about 40 during his homily. The pope also told the group to ask God for the grace to be rejoicing in hope for the day when they will be with Jesus.

That day, for Father Schlegel, appears to be sooner than expected. He said he was given the option of treatment with radiation and chemotherapy, which might have extended his life, or a noninvasive approach of letting things take their course.

He chose the latter, preferring quality of life over quantity.

He returned to Milwaukee in 2012 and was about nine months into his appointment as pastor of Gesu Parish when he was diagnosed with cancer.

“I am someone who has been extraordinarily healthy all my life and worked very hard at it,” the priest said during a March 30 interview in his office at Gesu. He said he continues to work out regularly and play racquetball in spite of the fact that he’s on a palliative hospice program through Froedtert Hospital in Milwaukee.

While the illness came as a surprise, he is approaching his suffering as “part of the Christian story,” he told the Catholic Herald, a publication that serves the Catholic community in southeastern Wisconsin.

“Did I ask, ‘Why me?’ Not really. I’ve seen so much (suffering) with others, ‘Why them?’ And you learn when it’s your turn,” he said. “I’ve seen so many wonderful people die young and painful deaths, you help them work through their issues with why me, why them with their family obligations, so when it came to myself, I said, ‘Well, maybe it is my time.'”

“I’m not a woe is me kind of guy. It’s never been me. I kind of roll with the punches,” he said, admitting pancreatic cancer was a rather strong blow.

After learning of his illness, he said he reflected on his life and found himself thinking of the current pope, a fellow Jesuit.

He said he really liked what the pope has been up to and wanted to tell him that, which put his recent trip in motion.

Father Schlegel, who has been to Rome several times, and met St. John Paul II and Pope Benedict XVI, said this meeting with Pope Francis was special.

After Mass, which he described as “beautiful, quiet, no-frills” with an extemporaneous sermon delivered by Pope Francis, the priests unvested and the pope greeted each person individually.

“He knew a little about all of us,” said Father Schlegel of the pope. “I told him, ‘I’m the Jesuit from the United States,’ and he said, ‘Ah, yes, I know, you have an illness’ and he knew I was a university president,” the priest recalled about the brief conversation they had in English and Spanish.

“He puts his hand right on you and if you try to kneel and kiss his ring, he will wave you off,” the priest added, noting that the pope grabbed his hand and pulled him closer in an embrace.

Even though Father Schlegel’s illness is causing him to feel more tired, he said the weeklong trip to Rome was worth the effort. He will remain pastor at Gesu for as long as his health will allow and looks forward to some traveling around the country to visit family and friends.

He has accepted that he is nearing the end of his life, and see it as perhaps a counterpoint to the current renewed push to legalize assisted suicide in several states.

“Maybe it is a counter-statement to euthanasia. I think I will die with great dignity, without that kind of human assistance, and if I can speak to the needs of others contemplating that kind of situation, fine, it is a grace and a gift,” he said.

Not that Father Schlegel doesn’t have melancholy thoughts about the prospect his tenure in pastoral work after so many years in academia could be cut short.

He also told parishioners in a letter in the parish bulletin this February that he is not eliminating the possibility of a miracle.

He asked them to pray for him using the prayer that Jesuit Father Pedro Arrupe, Jesuit superior general from 1965 to 1983, will one day be canonized. “Who knows, I may be the miracle he needs to be made a saint, so we could still have many more years together,” he wrote.