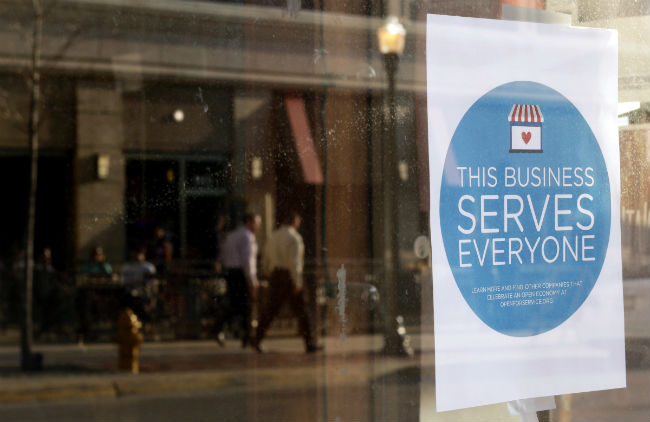 A sign reading, "This business serves everyone," is seen in the window of a barbershop in downtown Lafayette, Ind., March 31. (CNS photo/Nate Chute, Reuters)

INDIANAPOLIS (CNS) — The Indiana Catholic Conference’s executive director expressed concern about the “polarization” of discussion about the state’s religious freedom law, saying the Catholic bishops’ April 1 statement “was an attempt to bring people to a dialogue to help each other know that we’re not in conflict.”

Indiana’s five bishops urged “mutual respect” be shown in the debate over the Religious Freedom Restoration Act, known as RFRA, “to ensure that no one in Indiana will face discrimination whether it is for their sexual orientation or for living their religious beliefs.”

“As the statement indicates, this isn’t an either-or kind of situation at all,” said Glenn Tebbe, executive director of the Catholic conference, which represents the church in the state on matters of law and public policy.

“The church’s support for religious freedom, as well as the dignity of all persons, is a fundamental principle of the church. It’s not a matter of one or the other. It’s a matter of having both of them right beside one another,” he told The Criterion, newspaper of the Archdiocese of Indianapolis.

In the days that followed, critics across the state and around the nation claimed that it would open the door to discrimination against homosexuals and others. Defenders of the law subsequently argued that its purpose was solely to protect religious freedom from excessive government intrusion.

In response, Indiana legislative leaders announced that they would consider a bill to clarify the religious freedom law and send it to Pence.

In their statement, the bishops noted that every person is created in the image and likeness of God and so has an inherent dignity — which includes religious liberty — that must be respected by all.

In conclusion, the bishops expressed their support for efforts in Indiana both to defend the dignity of all persons and the rights of all people of all religions to be free from “undue burden from the government” in the practice of their faith.

In Arkansas, a similar backlash has greeted a RFRA law passed by the Legislature and sent to Gov. Asa Hutchinson, who April 1 told lawmakers he wants changes in the measure. According to The Associated Press, he is urging the Legislature to either recall the bill or come up with a follow-up measure so it will hew more closely to the federal RFRA law of 1993.

The federal law says that the government “shall not substantially burden a person’s exercise of religion” unless that burden is the least restrictive means to further a compelling governmental interest.”

But it does not apply to states, so several have passed their own version.

In Indiana and now in Arkansas, critics contend those versions are too vague and could be used to discriminate against gays and others.

Supporters of the Indiana law disagree. Richard Garnett, a law professor at the University of Notre Dame in northern Indiana, in an opinion column in the March 26 issue of the South Bend Tribune, called it a “moderate measure” modeled after the federal law and those of several other states and said it “does not give anyone a ‘license to discriminate.'”