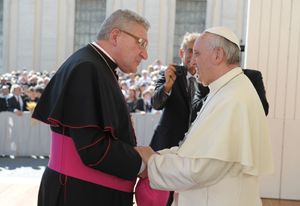 “My staff and I have long dreamed of this move,” Pittsburgh Bishop David A. Zubik said in a letter March 31 regarding the new poilcy on annulments. “Our dear Pope Francis inspired us to act now.(CNS photo/L’Osservatore Romano)

PITTSBURGH (CNS) — The Diocese of Pittsburgh has eliminated all fees for those seeking an annulment in the diocese.

“I know that the fee has stood in the way for many who are in need of an annulment,” said a letter from Bishop David A. Zubik of Pittsburgh to Catholics in his diocese.

Typically, those seeking annulments have paid up to $650 to the diocese, which covered about one-third of the costs, according to Father Thomas Kunz, a canon lawyer and the Pittsburgh diocesan tribunal’s judicial vicar — analogous to a chief judge in civil law.

Some applicants have paid less in circumstances where they did not have to go through as many steps in annulment process, said Father Kunz, who also is spiritual director for the diocese’s college seminary and diocesan episcopal vicar for canonical services. Others had to pay more depending on the complexity of the case, he added.

“My staff and I have long dreamed of this move,” Bishop Zubik said in his letter, dated March 31. “Our dear Pope Francis inspired us to act now. He has called for marriage tribunals to ‘do justice freely, as we have freely been forgiven by Jesus Christ.’ My hope is that this decision will enable many people to participate fully in the sacramental life of the church.”

The cost of changing the policy is being borne by the diocese’s annual appeal, called Our Campaign for The Church Alive. This year a grant from the campaign will subsidize two-thirds of the estimated $120,000 in fees collected annually, with the remainder borne by regular operating funds from the diocesan parish assessment system, called Parish Share. Over four years, the campaign funding will diminish so that by the fifth year, Parish Share will cover the full cost of annulments.

“My hope is that this decision will enable many people to participate fully in the sacramental life of the church,” Bishop Zubik said. “Many divorced Catholics leave the church after a civil remarriage because they cannot receive the Eucharist. Many divorced-and-remarried people who wish to join the Catholic Church are discouraged by the financial burden attached to an annulment process.”

One exception to the no-fee annulment process is if the applicant appeals the Pittsburgh tribunal’s decision to either the Archdiocese of Philadelphia or the Vatican.

“Many people are unclear about what an annulment is in the Catholic Church,” Bishop Zubik said. “A church annulment, which can only be sought after a civil divorce is final, is a declaration that the marriage was not spiritually binding.”

The average time from acceptance of a petition to a final decision is approximately 10 months. However, this time frame varies greatly according to the complexity of the case and other circumstances.

Divorced Catholics are not banned from receiving Communion. However, Catholics who have divorced and subsequently remarried civilly are prohibited from receiving it, but these Catholics “are welcome in our parishes,” Bishop Zubik said in his letter.

He noted that the diocese has support groups and retreats for divorced and separated Catholics, as well as volunteer advocates, some of whom have been through the annulment process themselves, who can offer support to those going through it.

Contrary to a common mistaken notion, the children of an annulled marriage are not considered illegitimate. “The church has always taught that all life is a gift from God,” said a statement from the Pittsburgh tribunal that accompanied the announcement. “Even if a declaration of nullity is granted, it never negates parenthood or its responsibilities.”