Mourners’ consolation is hope of the Resurrection, says archbishop 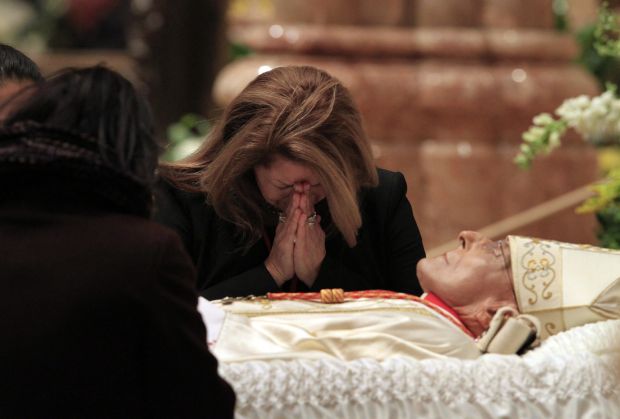 CHICAGO (CNS) — Hundreds of priests and seminarians from the Archdiocese of Chicago gathered in Holy Name Cathedral April 21 for evening prayer during the visitation for the Cardinal Francis E. George.

The service included sung psalms and canticles, with the men’s voices filling the cathedral, as well as Scripture readings and a homily from Chicago Archbishop Blase J. Cupich.

Cardinal George, who retired as archbishop of Chicago in 2014, died April 17. Two days of public visitation and prayer vigils led up to his April 23 funeral Mass at the cathedral.

At the evening prayer service, Archbishop Cupich centered his homily on a phrase that is included throughout the Easter season in the Liturgy of the Hours evening prayer: “Stay with us Lord, for evening draws near.”

Those words, spoken by the disciples when they were downcast and grieving, offer a reminder that the greatest works of God — creation, the cross and Christ’s resurrection — were accomplished in darkness, and that Cardinal George is now beginning to comprehend the meaning of God’s works, Archbishop Cupich said.

That is the focus of the rites surrounding Catholic funerals, the archbishop said.

While there have been many laudatory words offered about Cardinal George — about his scholarship and razor-sharp intellect, his leadership, his tenacity and courage — that is not what Catholics focus on when someone dies.

“Catholic tradition hesitates to let the past dominate these days of funeral liturgies,” he said. “It considers such an approach shortsighted, unequal to the totally other reality taking place. Our funerals are not celebrations of one’s life, a nostalgic return to past glories. Rather, they focus on the risen Christ presently active in our midst, whose power at work in us is able to accomplish far more than we ask and far more that we can imagine.”

It is the hope of the Resurrection that consoles those who grieve and mourn, he said.

“The consolation offered to us in these days is not limited to the warm support and friendship we offer each other, as important and meaningful as that is,” Archbishop Cupich said. “Rather, our consolation comes in knowing that we participate and contribute to Christ’s redeeming work, which we pray is taking place for the cardinal.”

The archbishop offered special condolences Cardinal George’s sister, Margaret, and the rest of his family, and also to Father Dan Flens, the cardinal’s longtime priest-secretary who remained with him through his final illness.

“Dan, your steady, devoted and unconditional care for the cardinal not only in these last days, but throughout the years of service as his secretary, inspire us now to follow your good example by offering our prayerful support for Cardinal George,” Archbishop Cupich said. “Repeatedly in his final days, the cardinal told me and others that you made possible his ministry during his years of service here.”

Those words drew an extended standing ovation from the congregation.

At the end of his homily, the archbishop also offered condolence to those who gathered to pray.

“I want you, my brother priests and our seminarians, to know that I grieve his loss with you,” he said. “Your experience with him was much deeper and longer than mine, but I can tell you that during the last months of his life and my first months as archbishop, he was unfailingly supportive to me, impressing upon me at this moment how he must have been the same for you over these past 17 years. So together in our grieving, we pray, ‘Stay with us Lord, for evening draws near.'”

After the service, several priests said they were touched by the recognition of Father Flens and of retired Auxiliary Bishop Raymond E. Goedert, who lived in the cardinal’s residence for Cardinal George’s entire episcopacy and offered the closing prayer at the service. Bishop Goedert was vicar general when Cardinal Joseph Bernardin died in November 1996. Bishop Goedert told news media he was one of those present at the cardinal’s bedside when he died. He administered last rites to the cardinal.

“I remember Ray Goedert giving the closing prayer for Cardinal Bernardin and tearing up, and here he is almost 18 years later doing the same thing for Cardinal George,” said Father Greg Sakowicz. “It went fast.”

The Catholic New World, newspaper of the Archdiocese of Chicago, has created a tribute website about Cardinal Francis E. George’s life and legacy: http://cardinalfrancisgeorge.org. The site has videos, photos and stories about public visitation, vigils and the funeral.

Martin is a staff writer at the Catholic New World.

NEXT: Ambiguities about Serra should not discount sainthood, panelists say