Ambiguities about Serra should not discount sainthood, panelists say 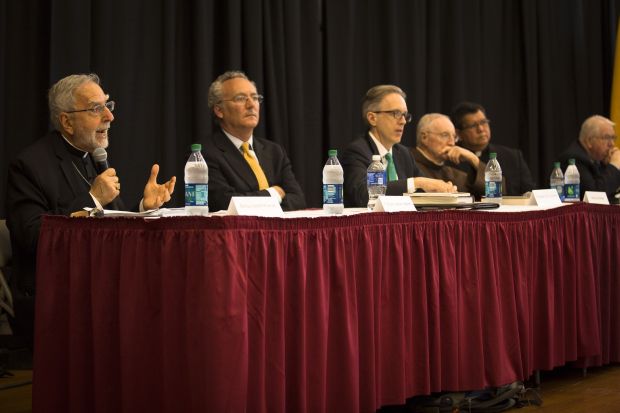 Bishop Gerald F. Kicanas of Tucson, Ariz., speaks April 22 at The Catholic University of America in Washington as a member of a panel of historians and other clergymen who came together to discuss the significance of the upcoming canonization of Blessed Junipero Serra. (CNS photo/Tyler Orsburn)

WASHINGTON (CNS) — Although the upcoming canonization of Blessed Junipero Serra has stirred mixed reaction, a group of panelists April 22 said the ambiguities around the friar should not discount the good work he did or the positive dialogue and reconciliation that could result from his sainthood.

“He made a lot of mistakes, but he was a man of his time. He was flawed but heroic,” said Franciscan Father Joe Nangle about Blessed Serra, the 18th-century Spanish Franciscan who established missionaries in the U.S.

Father Nangle, associate pastor of Our Lady Queen of Peace Parish in Arlington, Virginia, was a panelist in the “Founding Padres” discussion held at The Catholic University of America. It focused on three Catholic priests represented in the U.S. Capitol’s Statuary Hall: Blessed Serra and Jesuit Fathers Jacques Marquette and Eusebio Kino.

Much of the discussion focused on Blessed Serra, particularly since his canonization will take place Sept. 23 during a Mass on the lawn of the Basilica of the National Shrine of the Immaculate Conception in Washington.

Father Nangle, who served as a missionary in Latin America for 15 years, was not alone in having mixed feelings about Blessed Serra, who was described by Pope Francis as “the evangelizer of the West in the United States” but has been labeled by some Native Americans as a brutal colonizer and someone who suppressed Indian culture.

“I appreciate the ambiguities,” said Tracy Neal Leavelle, associate professor of history and associate dean for humanities and fine arts at Creighton University in Omaha, Nebraska, during the discussion sponsored by Catholic University’s Institute for Policy Research & Catholic Studies.

Leavelle, author of “The Catholic Calumet: Colonial Conversions in French and Indian North America,” said he hoped people would use Blessed Serra’s canonization as a “chance to look at this country with all its flaws.”

Father Henry Sands, who heads the Native American efforts of the Secretariat of Cultural Diversity in the Church for the U.S. Conference of Catholic Bishops, similarly acknowledged the uneasiness many Native Americans have expressed about Blessed Serra.

The priest, a member of the Ojibwe, Ottawa and Potawatomi tribes, said that when Blessed Serra’s canonization was announced in January many Native Americans felt he represented many things that “were not right” in the way they had been treated.

He said some of the criticism of Blessed Serra “has been overblown” but he also acknowledged that the canonization offers an opportunity for Native Americans to express their frustration and also gives Christians the chance to “make a difference in this” by their prayers and efforts to reach out to Native Americans.

Steven Hackel, a history professor at the University of California at Riverside who has written a biography titled “Junipero Serra: California’s Founding Father,” said Blessed Serra’s canonization can draw attention to the friar’s work in developing the Western part of the nation before the country was even established.

He noted that Blessed Serra, a contemporary of George Washington, brought a focus on farming and agriculture, which was crucial to the nation’s development.

Hackel said the Catholic Church should talk more about Blessed Serra and said these discussions could lead to reconciliation with Native Americans.

Bishop Gerald F. Kicanas of Tucson, Arizona, highlighted the challenges for pioneer missionaries, noting they had no clear policy to follow particularly about adapting to local culture and languages.

“It was clearly daunting,” he added, noting that Father Kino, who established more than 20 missions in the Sonoran Desert also faced hot temperatures, unpredictable winds and wolves.

The bishop, who is a proponent of the cause of sainthood for Father Kino pointed out that the mission priest, who died in 1711, had “a deep love of God and love for the poor” and believed missionaries should pray, work hard and go where the people are.

PREVIOUS: Mourners’ consolation is hope of the Resurrection, says archbishop