Pope is popular for his example, D.C. cardinal says 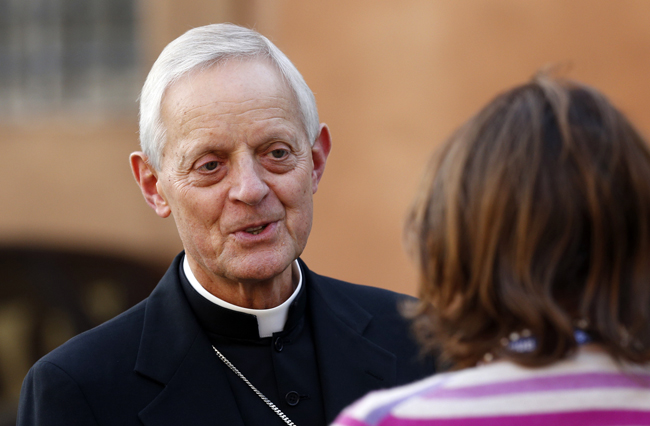 Cardinal Donald W. Wuerl of Washington speaks with a journalist at last year's Synod of Bishops on the family at the Vatican. (CNS photo/Paul Haring)

WASHINGTON (CNS) — When Pope Francis comes to the United States in September, his message will be that “God loves all of us the way we are” and “God asks us to love one another,” said Cardinal Donald W. Wuerl of Washington.

“We see in him not just the message, but how you do it,” the cardinal said in an interview with Fox News on Easter. “The way in which he lives, treats people, responds to people says, I think, to many people … he sounds and looks a lot like what Jesus would have sounded like.”

Cardinal Wuerl said that “a beautiful part of his ministry” and why people find Pope Francis “so inviting” is that “he keeps saying, ‘Go out, meet people where they are, and accompany them on their journey,’ so that perhaps all of us could get a little closer to where we all need to be.”

President Barack Obama and first lady Michelle Obama will welcome Pope Francis to the White House Sept. 23. The pontiff will address a joint meeting of Congress Sept. 24, making him the first pope to do so.

Full details of his itinerary in the nation’s capital have not been released, but Pope Francis has said that while in Washington he would canonize Blessed Junipero Serra at the Basilica of the Shrine of the Immaculate Conception.

His U.S. trip includes a Sept. 25 to address the U.N. General Assembly in New York. He will be in Philadelphia Sept. 26 and 27 for the World Meeting of Families in Philadelphia.

In the Fox interview, Cardinal Wuerl discussed the ongoing debate on religious freedom and discrimination, saying that people involved in that debate need to realize there is strong discrimination against the Catholic Church.

He also talked about, for instance, the situation of a Christian baker being forced to make a cake for a same-sex wedding when the baker is morally opposed to such marriages.

Cardinal Wuerl asked whether the use of anti-discrimination laws is seen as one-way street.

“I wonder if across the board we’re not seeing different measuring rods being used when it comes to issues that we’re facing here,” he said. “For example, why would it be discrimination for a Catholic university to say we’re not going to allow a gay rights or an abortion rights group to have their program on our campus, and it not be discrimination for that group to insist that the Catholic school change its teaching?”

In one case, the Christian owners of a bakery in Oregon face a fine of $150,000 after being found guilty of violating a state anti-discrimination law for declining to make a wedding cake for a lesbian couple.

Cardinal Wuerl said he believes there must be a way to “recognize the dignity of everyone and at the same time recognize the freedom and the rights, especially religious liberty, of everyone.”

NEXT: Definition of marriage in America at stake in Supreme Court’s rulings