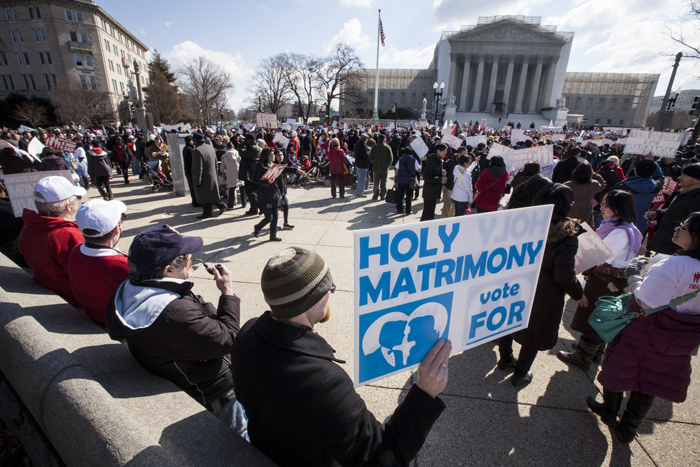 But judging from the outpouring of friend-of-the-court or “amicus” briefs, the court is expected to affect the very definition of marriage in American society.

Around 120 “amicus” briefs filed with the court by the early April deadline offer the views of everyone from people who have sought same-sex marriages and states that support them to scholars and religious institutions that come down on both sides of the question, plus business leaders, sociologists and others who weigh in on the effects of different types of marriage.

Among those are groups and individuals with views about the potential effect of a ruling on First Amendment rights and those with opinions about issues such as the use of sexual orientation change therapy.

The court has bundled appeals of lower court rulings about the laws of Michigan, Ohio, Kentucky and Tennessee under the title of the Ohio case, Obergefell v. Hodges. That case arose after the October 2013 death of John Arthur of Cincinnati. He and his longtime partner, James Obergefell, had married earlier that year in Maryland. When the local Ohio registrar agreed to list Obergefell as the surviving spouse on Arthur’s death certificate — which is key to a range of survivor’s benefits — the state attorney general challenged the status because Ohio law bars same-sex marriages.

Tanco v. Haslam, the Tennessee case, and Bourke v. Beshear, the Kentucky case, similarly challenge those states’ refusal to recognize same-sex marriages performed in other jurisdictions. DeBoer v. Snyder, the Michigan case, does so based on a lesbian couple’s efforts to jointly adopt their children. Michigan law limits adoption by a second parent to married couples and the state does not allow or recognize same-sex marriages.

In agreeing in January to take the cases, the Supreme Court said it would consider two constitutional questions:

— Does the 14th Amendment require a state to license a marriage between two people of the same sex?

— Does the 14th Amendment require a state to recognize a marriage between two people of the same sex when their marriage was lawfully licensed and performed out of state?

The U.S. Conference of Catholic Bishops filed a brief arguing that the state laws limiting marriage of heterosexual couples should be upheld. The first reason the USCCB cites is that “as a matter of simple biology, the sexual union of one man and one woman is the only union capable of creating new life,” and that homes with a father and a mother are the optimal environment for children. It said it is “reasonable and just” for states to treat heterosexual marriages as having more value than other kinds of relationships.

“Government support for a marital bond between mothers and fathers serves the interest of reducing, or preventing further increases in, the incidence of single parenthood and the consequent burdens it places upon the custodial parent (usually the mother) and the public,” it said.

The USCCB also argues that laws permitting same-sex marriages redefine the traditional definition of marriage and would “needlessly create church-state conflict for generations to come.”

The brief said that when government treats people differently on the basis of race, sex or national origin, “it discriminates on the basis of an immutable trait identifiable from conception or birth. In contrast, a decision to participate in a same-sex relationship is not a trait, but a species of conduct.”

The USCCB brief noted that the court has previously said that while same-sex sexual conduct may be “closely correlated” with homosexual inclination, “the correlation is by no means absolute, and what separates the two is critical both legally and morally — the exercise of a responsible human will. The court should maintain this venerable distinction between inclination and overt conduct because it pervades the Anglo-American legal tradition, applicable to but extending far beyond discussions of sexuality. In general, though the government may legally disadvantage all manner of conduct, the Constitution forbids it to do the same to a person’s status, belief, or inclination.”

Among other Catholic entities that filed briefs, the Michigan Catholic Conference weighed in, echoing many of the USCCB’s points about the definition of marriage and the value to the state of limiting marriage to heterosexual pairs in the interest of the foundation of family. But it also echoed the state of Michigan’s defense of its law.

“States’ decisions to recognize, benefit, and burden only the naturally procreative union serves legitimate state interests,” the Michigan conference said, quoting from the state’s defense of its law: “One starts from the premise that governments got into the business of defining marriage, and remain in the business of defining marriage, not to regulate love but to regulate sex, most especially the intended and unintended effects of male-female intercourse.”

The state encourages, supports and protects traditionally defined marriage to promote the stability of society and its children, the brief said. “It is not hard to envision problems that can result without state regulation of the natural effects of male-female intercourse. States regulate opposite-sex marriage to ensure domestic tranquility, for example, by legitimizing children, ensuring domestic support and prohibiting neglect.”

The Supreme Court is expected to rule on the cases before the end of its term in late June.

PREVIOUS: Pope is popular for his example, D.C. cardinal says

NEXT: End of extreme global poverty in sight by 2030