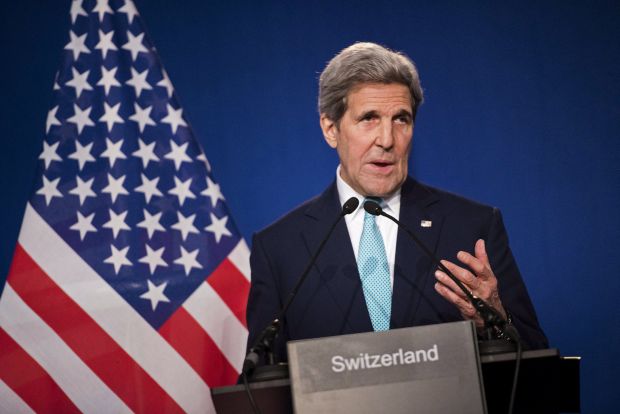 WASHINGTON (CNS) — The adoption of a framework related to Iran’s nuclear program by the United States and other countries is an important step in “advancing a peaceful resolution” to the questions surrounding the program, the chairman of the U.S. bishop’s Committee on International Justice and Peace.

Bishop Oscar Cantu of Las Cruces, New Mexico, said April 8 in a letter to Secretary of State John Kerry and April 13 in letters to every member of Congress that the framework was a milestone in the long-standing negotiations to curb the “unacceptable prospect of Iran developing nuclear weapons.”

Copies of the letters were released April 14 by the U.S. Conference of Catholic Bishops.

The framework was announced April 2 in Lausanne, Switzerland, and involved Iran and what is often referred to as the “P5+1,” or the five permanent members of the U.N. Security Council — China, France, Russia, the United Kingdom and the United States — plus Germany.

The talks have been criticized by some members of Congress, who argue that Iranian officials cannot be trusted to abide by any deal and that any agreement with Iran could be disregarded once President Barack Obama concludes his term Jan. 20, 2017.

Bishop Cantu wrote that despite the challenges in reaching an agreement over Iran’s nuclear program, “it is vital to continue to foster an environment in which all parties can build mutual confidence and trust in order to work toward a final accord that enhances peace.”

“For this reason, our committee will continue to oppose congressional efforts that seek to undermine the negotiation process or make a responsible multiparty agreement more difficult to achieve and implement,” the letter continued. “The alternative to an agreement leads toward armed conflict, an outcome of profound concern to the church.”

The letter cited the words of Pope Francis, who prayed Easter Sunday that the framework “may be a definitive step toward a more secure and fraternal world.”

The bishop called for a final agreement to secure peace in southwestern Asia and to “ensure its full implementation.”

“As we have noted in the past, Iran has threatened its neighbors, especially Israel, and contributed to instability in the region. We hope this agreement is a first step in fostering greater stability and dialogue in the region,” the letter said.

As congressional representatives received the letter, an advertisement supporting the framework was published in the April 13 edition of Roll Call, a newspaper that covers Capitol Hill.

More than 45 Christian leaders signed the ad, including Sister Simone Campbell, a Sister of Social Service, who is executive director of the Catholic social justice lobby Network; Sister Patricia Chappell, a Sister of Notre Dame de Namur, who is executive director of Pax Christi USA; Marie Dennis, co-president of Pax Christi International; and Stephen Schneck, director of the Institute for Policy Research & Catholic Studies at The Catholic University of America.

NEXT: Pope will meet youths, religious leaders in June visit to Sarajevo