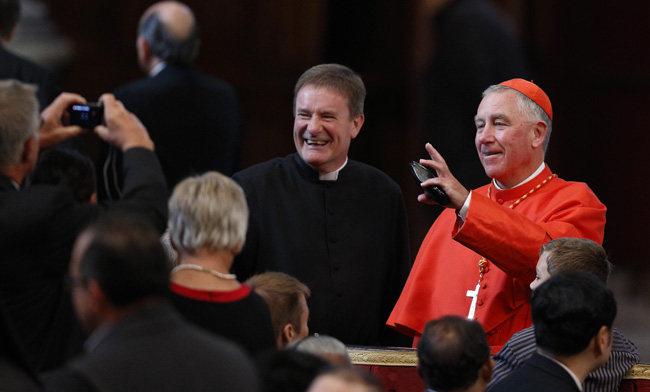 New Cardinal John Dew of Wellington, New Zealand, greets guests as he arrives for a Mass with Pope Francis and new cardinals in St. Peter's Basilica at the Vatican Feb. 15. The Cardinal was among those giving curia assignments by the pope April 13. (CNS photo/Paul Haring)

VATICAN CITY (CNS) — Giving assignments to 15 of the cardinals he created in February, Pope Francis named some of them members of pontifical councils widely expected to be merged with others.

In the months following their induction into the College of Cardinals, those who who are under the age of 80 are named members of various Vatican congregations and councils; while the day-to-day work of Vatican offices is carried out by the staff, the direction and major decisions of the offices are determined by the full membership.

As Pope Francis began another three-day meeting April 13 with his international Council of Cardinals to discuss the reorganization of the Roman Curia, the Vatican published the list of his assignments for the cardinals created in February.

Several of them were assigned to the pontifical councils for justice and peace, Cor Unum, migrants and travelers, and health care ministry — all offices that had been expected to merge into a new Congregation for Charity, Justice and Peace.

In February, the entire College of Cardinals was briefed about the Council of Cardinals’ progress, including proposals to create the new charity, justice and peace congregation. They also heard of plans to establish a Congregation for Laity, Family and Life, merging the current pontifical councils for laity and for the family, along with the Pontifical Academy for Life. No new members of the councils for laity or for the family were announced in the slate released April 13.

Among the assignments, Pope Francis named Cardinal John A. Dew of Wellington, New Zealand, to be a member of the Congregation for the Evangelization of Peoples and of the Pontifical Council for Promoting Christian Unity.

Spanish Cardinal Ricardo Blazquez Perez of Valladolid, a theologian and president of the Spanish bishops’ conference, was the only one of the new cardinals named a member of the Congregation for the Doctrine of the Faith.

The youngest member of the College of Cardinals, Tonga’s 53-year-old Cardinal Soane Mafi, was named a member of the Congregation for the Evangelization of Peoples and the Pontifical Council Cor Unum, which promotes and coordinates Catholic charitable giving.

NEXT: Bishop: Framework on Iran’s nuclear program a step to advancing peace