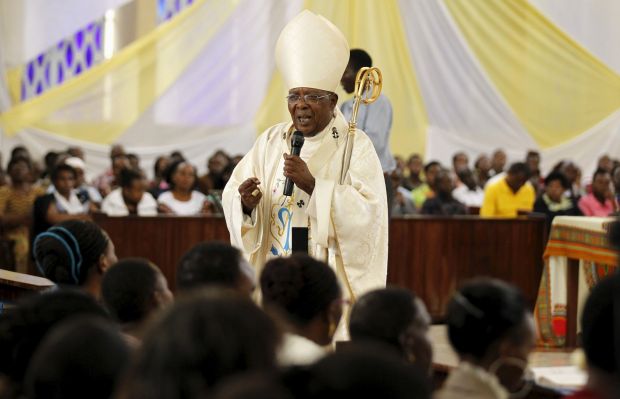 NAIROBI, Kenya (CNS) — The president of the Kenyan bishops’ conference called on Easter worshippers to commit themselves to praying for peace and security in their homeland after militants attacked a college campus days earlier.

Cardinal John Njue of Nairobi also condemned the April 2 attack by the Somalia-based al-Shabaab militants at Garissa University College in which Christian students were targeted.

After reading a message of condolence from Pope Francis to the congregation at Holy Family Basilica in Nairobi, Cardinal Njue urged worshippers to commit themselves to praying for peace and security in the country.

“We need to constantly invoke God’s name, following common attacks in the country by the al-Shabaab militia group, including the most recent one at Garissa,” the cardinal said.

In his message, Pope Francis condemned the assault by Somali militants, calling it an act of “senseless brutality.”

“In union with all people of goodwill throughout the world, his holiness condemns this act of senseless brutality and prays for a change of heart among its perpetrators, “said the pope’s message in a statement sent by the Cardinal Pietro Parolin, Vatican secretary of state.

“I have assured the shocked bishop of the bishops’ support, through prayers and any other (means),” Cardinal Njue said.

He reminded Christians that Christ was persecuted and suffered for the sake of people’s sins and told them never to give up even in the face of terror.

“We as a nation are undergoing through many challenges and we must remain fixed to things above. Let us pray for the families and victims of Garissa terror attack and let their dead be a meaning to us.” Cardinal Njue said.

The cardinal called for a global response to terrorism and urged Kenyans not to look at Garissa massacre through a religious lens.

“Even in the wake of the insecurity in the country, we must remain united and not give a few people the impression that this is a war between Christians and Muslims,” Cardinal Njue says.

In an address to the nation, Kenyatta cited those who have stood with the country as it dealt with the aftermath of the attack, including the United States, United Nations and Pope Francis.

Contributing to this story was Francis Njuguna and Walter Cheruiyot.