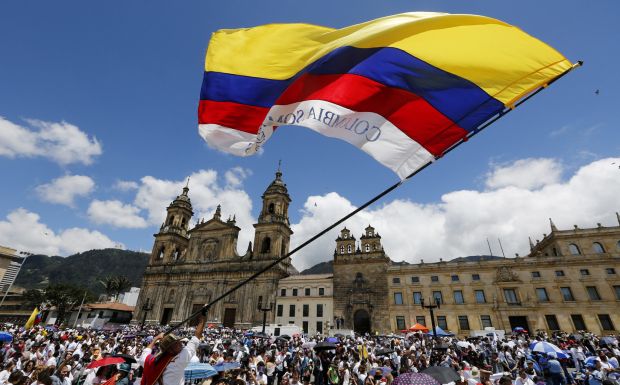 A man waves a national flag during the "March For Life" March 8 in Bogota, Colombia. The event supported peace negotiations between the government and the Revolutionary Armed Forces of Colombia. (CNS photo/John Vizcaino, Reuters)

VATICAN CITY (CNS) — Pope Francis called on the people of Colombia to work toward peace, and maintain hope that negotiations will succeed, according to the Vatican secretary of state.

The pope urged them to “not lose energy or hope” at such a crucial time in the peace process and encouraged them “to continue to work for truth, justice and reparation” so that “what went before will never be repeated,” said Cardinal Pietro Parolin in a letter sent on the pope’s behalf to the Colombian bishops for Holy Week. Vatican Radio released excerpts of the letter April 3.

“We must continue the commitment to the displaced, to survivors of land mines, those who have endured the taking of their property, the kidnapped, with everyone who has suffered,” Cardinal Parolin wrote. “Constructing peace is a complex process that does not come to completion in short-term spaces or plans. Risks need to be taken to cement peace,” the letter said.

“The pope has supported the peace process from the beginning, from when I first visited” the Vatican in May 2013. The pope, he said, has sent him several messages, which always encourage him to persevere and “not throw in the towel.”

The 50-year conflict between the government and Marxist rebels has resulted in an estimated 220,000 fatalities. Colombia opened peace negotiations with the rebel group, the Revolutionary Armed Forces of Colombia, more than two years ago. Negotiators already have reached agreements regarding illegal drug trafficking and land reform, and agreements are in the works on the possibility of reparations for victims of the war.

The letter to Colombia’s bishops said Pope Francis wanted to visit Colombia to encourage the people to pursue peace. Initially many people in Colombia thought the visit would be added to a planned trip to Bolivia, Paraguay and Ecuador in July. However, Santos said April 6 it likely will be in 2016 during a trip that also may include Peru, Chile and the pope’s native Argentina.

Archbishop Ettore Balestrero, the papal nuncio in Colombia, agreed. “It will be another trip. I do not think it will be this year because of all the commitments and trips the pope already has planned. He says it will be soon,” though, the archbishop said.