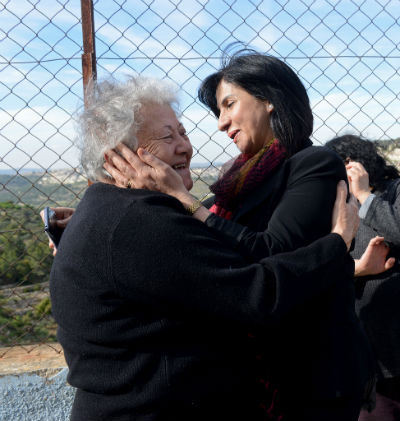 BEIT JALLA, West Bank (CNS) — Israel’s Supreme Court blocked a plan to build a separation barrier through the Cremisan Valley in the West Bank that would have divided a Catholic monastery, a convent and adjacent olive vineyards.

Church officials celebrated the April 2 court order, saying it was an early Easter gift as Christians prepared to celebrate the Passion and resurrection of Jesus.

The decision ends a nine-year legal battle over a defense ministry plan for a wall that would have cut through Palestinian-owned land, separating families from their agricultural land as well as separating Salesian Sisters from the community they serve in their school.

The Supreme Court called on the defense ministry to set a new route that causes less upheaval to local people, the Salesian monks and nuns and their vineyards.

“We hope this is a first step which will be followed by other steps. We can’t lose hope if God is with us. We are a church of Calvary, but in this occasion we are already the church of Resurrection,” Patriarch Twal said.

He acknowledged the important role played by the U.S. Conference of Catholic Bishops, other church leaders and the diplomatic community in advocating against construction of the wall.

“This wall was illegal and justice has prevailed,” Patriarch Twal said.

The legal victory, the patriarch said, was the result of a joint effort among the Catholic Church, landowners, the three neighboring municipalities, and Israelis who supported their case. Some efforts were made openly, he said, while some were behind the scenes.

“This is a very joyful day. This is a very important decision, which can be used as a precedent in future cases should they reach the Supreme Court or other courts,” Raffoul Rofa, executive director of the Society of St. Yves of the Latin Patriarchate of Jerusalem, said at the news conference at the Salesian convent.

The mayors of West Bank communities of Bethlehem, Beit Jalla and Beit Sahour, all of whom visited Pope Francis in their effort to garner church support for their cause, also attended the news conference.

Attorney Gayath Naser, who has spent half of his legal career on the case on behalf of the landowners, called the court’s decision “very courageous” and that it showed the court can be “independent and can deal with cases using legal glasses and not political glasses.”

“It’s not that the court said they can’t build a separation wall. They said that if they do make another seizure order, they need to do it far from here. The court was very clear that (the defense ministry) can’t separate between the monastery and their community and that they can’t take over such quantities of land,” said attorney Zvi Avni, an Israeli who represented the St. Yves society during the case and the Salesian sisters when they filed a petition with the court.

Despite the ruling, the issue of where to build the wall remains unresolved. The Supreme Court said that neither the route for the wall suggested by the defense ministry nor an alternative route offered by the religious communities and property owners were sufficient.

The ruling requested that the military commander consider alternatives less harmful to the local population and the monasteries. The Israeli military must issue a new order for any future plans for the wall, which also can be appealed by the local population, the court said.

PREVIOUS: Pope to priests: Exhaustion is part of ministry

NEXT: Pope asks prisoners to pray that Christ make him a better servant