Pope to priests: Exhaustion is part of ministry 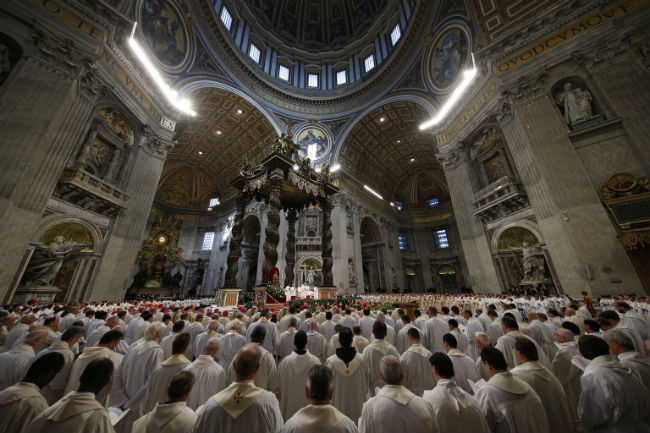 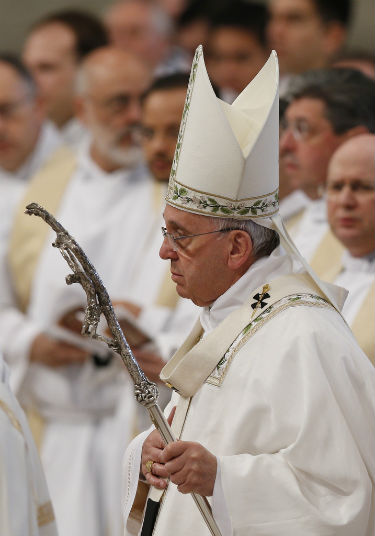 But priests need to learn how to draw strength from their flock and their love for God, and not look for rest or retreat in “worldly pursuits,” hiding in their office or riding in cars “with tinted windows,” he said April 2 during the chrism Mass in St. Peter’s Basilica.

Priests can find renewal when they do not try to be “supermen,” but instead put their trust in God to embrace them and carry them through, he said.

As Holy Thursday was the day Jesus shared his priesthood with the apostles, Pope Francis led the more than 1,500 priests, bishops and cardinals in a renewal of their priestly vows and dedicated his lengthy homily to the priesthood, focusing on “the tiredness of priests.”

“Do you know how often I think about this weariness all of you experience? I think about it a lot and I pray about it often, especially when I am tired myself,” he told those assembled. (See the full text of the pope’s homily.)

The reading from the Book of Isaiah, he said, outlines the challenging work of priestly ministry: bringing glad tidings to the lowly, healing the brokenhearted, proclaiming liberty to those held captive, releasing the imprisoned and comforting those who mourn. 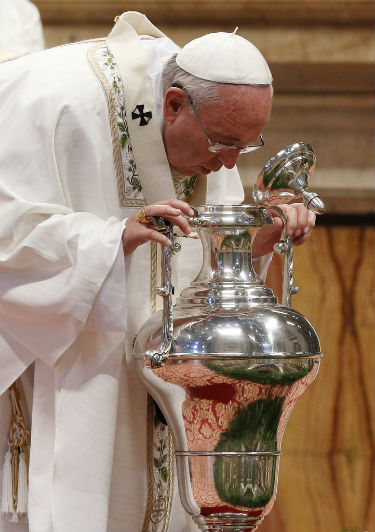 If a priest is doing his job right — if his heart is open and he experiences with compassion all the troubles, fears and joys of his people, then “so many emotions, so much affection exhaust the heart of a pastor,” he said.

For a priest, knowing what one’s flock is going through is not a detached reading of “a news report,” but comes from “suffering with them.”

Sharing in people’s suffering makes the heart feel “broken into a thousand little pieces” and given away so much it almost seems “eaten up by the people,” he said, drawing a parallel with what is said at the Last Supper: take this all of you, eat this, drink this.

The 78-year-old pope, who works at an often demanding pace and is known to not take vacation, said, “How difficult it is to learn how to rest. What comes into play here is our trust and our remembering that we too are sheep and we need the Lord to help us.”

While he had warned members of the Roman Curia in December of “15 spiritual diseases” they should avoid, in his Holy Thursday homily for priests Pope Francis outlined three kinds of “weariness” they should watch out for: exhaustion from being with the people; fatigue from fighting “the devil and his minions;” and ennui from becoming selfish and worldly.

Like Jesus, the priest is called to go out and care for others, he said, which leads to a kind of “weariness of the crowd.”

“People love their priests, they want and need their shepherds,” and a priest “with the smell of sheep” experiences a “good and healthy tiredness” and can smile “the smile of a father who gazes upon his children or grandchildren.”

But that gaze “has nothing to do with those who smell of expensive cologne and look at you from afar and from on high,” he said in a homily delivered in Italian.

If Jesus is there shepherding with the priest, “we cannot be shepherds whose faces are bitter, grouchy or, even worse, bored,” because being with the flock with the smile of a father reflects a weariness that brings joy, he said.

The “weariness of enemies” comes from defending one’s flock from evil and battling the devil, who tries to silence the word of God and distort it, he said.

Priests must not let down their guard and must “neutralize” the bad without destroying the good, but they also must not presume “to protect like supermen what the Lord alone must protect.”

“In these situations of weariness, the Lord says to us: ‘Have courage! I have overcome the world’ and this word gives us strength,” he said.

When talking about the third form of weariness, the “weariness of ourselves,” the pope emphasized that it was his final point “so that you won’t be too worn out by this homily,” which at 21 minutes, was longer than the norm for Pope Francis.

While the first two kinds of weariness “come from being exposed” to the outside world, which is what pastoral care demands, the third kind of weariness was “perhaps the most dangerous” because it is self-centered, he said.

It was a paradox of giving up everything for the priesthood yet yearning for the fleshpots of Egypt — “a weariness I like to call ‘flirting with spiritual worldliness,'” he said.

The best way to avoid this danger, he said, is to never let go of that first love for Christ. “Only love gives rest,” he said.

The weariness that comes from following Christ and being human “is precious in the eyes of Jesus who embraces us and lifts us up,” he said.

The pope told priests to let Jesus continue to personally wash their feet and cleanse them from “every stain, that worldly and grimy smog that clings to us from the journey we make in his name.”

No priest has to let his feet stay dirty and sore, he said. “Like war wounds, the Lord kisses them so that he washes away the grime of our work,” he said.

“Let us learn to be tired out, but a good tired out!”

Later in the day, the pope was scheduled to celebrate the Holy Thursday Mass of the Lord’s Supper at a Rome prison and wash the feet of six male and six female inmates.