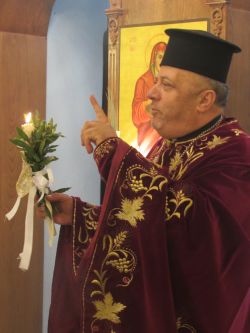 “How can the Muslims believe this is the Holy Land if they don’t see anybody here?” said Father Nabil Haddad, who is also pastor of Sts. Peter and Paul Melkite Catholic Church in Amman, Jordan’s capital. “I want to take pride in the tourist presence here, that this is the Holy Land.”

Tourism in Jordan was down in 2014 compared to 2013, despite Pope Francis’ 18-hour stop in Jordan as part of a more extensive pastoral visit to the Holy Land.

Father Haddad acknowledged during a recent dinner meeting with U.S. religion writers and bloggers that many of Jordan’s neighbors are in various states of upheaval, but that Jordan itself has remained unaffected thanks to efforts at virtually all levels of public life to foster tranquility and acceptance of others, despite differing religious beliefs.

“Every time we saw something happening in the United Sates against Islam, your brothers and sisters in the region suffered,” he said.

“Every time we saw some pastor in Florida do a stupid thing like threatening to burn the holy Quran,” he added, “there was turmoil in the streets … the Muslims here hold that all Christians are in some way responsible.”

In 2004, Father Haddad promoted the Amman Message, issued during the Islamic month of Ramadan. He said he took it to John Danforth, then U.S. ambassador to the United Nations, “before the ink was dry.”

Father Haddad said Danforth asked him why this message was important. The priest said he replied the moderate interpretation of Islam contained in the document is “the kind of Islam I want to live with.”

Jordanian law bans Christian proselytizing. Asked whether the law should be changed, Father Haddad voiced satisfaction with the law.

“Jordan is very Muslim. Plus, we are less than 4 percent” of the population, he said. “But I have never seen anywhere in Jordan where it says, ‘For Muslims Only.'”

He added, “I preach my message, not necessarily carrying a copy of the holy Bible … but giving a message of love and respect. That is why I must go out in my formal (clerical) attire with my pectoral cross. I need to present my Christianity to them in a way that would not cause any sensitivity (problems).”

NEXT: France says Vatican has not issued response for proposed ambassador