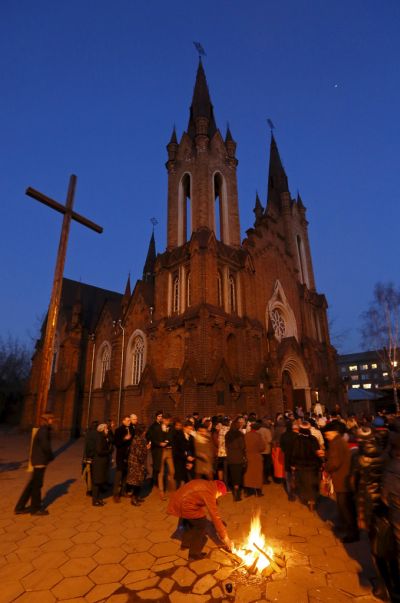 People light candles in front of a Catholic church during the Easter Vigil in the Siberian city of Krasnoyarsk, Russia, April 4. A Russian church official said the bishops’ conference is studying the implications of a new government law tightening control over the funding of churches and religious associations. (CNS photo/Ilya Naymushin, Reuters) See RUSSIA-LAW April 22, 2015.

WARSAW, Poland (CNS) — A Russian church official said the bishops’ conference is studying the implications of a new government law tightening control over the funding of churches and religious associations.

“What matters in Russia isn’t what the laws say, but how they’re interpreted and applied by local officials,” said Msgr. Igor Kovalevsky, secretary-general of the five-member bishops’ conference.

“Despite past tensions, our church is currently not in a bad state. But there are still elements and factors in Russian society that could negatively affect Catholic life. If new problems now emerge, the church will have to confront them.”

In mid-April, Russian President Vladimir Putin approved a law requiring all churches with funds and property from abroad to file detailed reports about their staffers and activities.

Russian media said the draft law was intended to prevent the involvement of religious groups in “terrorist and extremist activity” or “violations of Russian law,” but added that it had been criticized as a threat to religious freedom by Christian, Muslim and Jewish representatives.

In an interview with Catholic News Service, Msgr. Kovalevsky said Catholic leaders had read the draft law, which had been “prepared openly, without secrecy,” and hoped it would mostly “confirm existing practices and procedures.”

“However, having already had to submit records to the Justice Ministry on foreign funds received by Caritas and other Catholic charities, we’ll have to see how this new law affects our work,” Msgr. Kovalevsky said.

“Ties between the Russian Federation and Holy See are officially good, and our own communities are now generally treated with goodwill. But while anti-Catholic voices are confined to the margins, there are still technical problems which need resolving.”

The new legislation is expected to extend a 2012 law that obliges nongovernmental and nonprofit organizations with funding from abroad to register as “foreign agents.”

Police have raided offices of Amnesty International, Human Rights Watch and other foreign-linked groups under the law, which was heavily criticized by the European Union and U.S. State Department.

The new law is believed unlikely to affect Russia’s Orthodox Church, which was praised by Putin in an April 12 Orthodox Easter message for its “enormously constructive role” in preserving the country’s “historical and cultural legacy” and “caring tirelessly for the unity of society.”