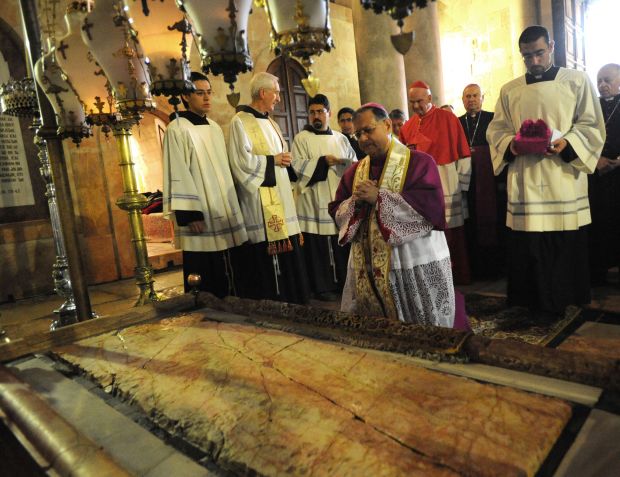 Latin Patriarch Fouad Twal of Jerusalem prays at the Stone of Unction before leading the the Easter Vigil Mass in the Church of the Holy Sepulcher in Jerusalem April 3. It is believed that the body of Jesus was anointed on the stone after his crucifixion. (CNS photo/Debbie Hill)

JERUSALEM (CNS) — Christians in the Middle East are called to help the light of peace emerge from the violence and anguish of war in much of the region, drawing inspiration from the resurrected Jesus, Latin Patriarch Fouad Twal said in his Easter homily.

“Our future in this region and in the world is uncertain and even incomprehensible, but do not be afraid. Christ assured us, he is “with us always until the end of time,” Patriarch Twal told the congregation at the Church of the Holy Sepulcher.

Following the darkness and death of Good Friday, Christians can “believe and sing, ‘Christ is risen,’ and relive “the miracle of the Resurrection as did the Roman centurion at the foot of the cross and Jesus’ disciples who became joyful witnesses in suffering for Christ,” he said.

“Therefore, let us bury in the tomb of Christ our worldly inclinations, our contradictions, our religious divisions, our hostilities, our lack of faith and our fears,” Patriarch Twal said. “Believe in good, believe that peace is possible. From this tomb emanated light and peace. And here today, from this battered Holy Land, light and peace must spring out again. Let us pray for the grace of God for the Holy Land and the whole world.”

As people of faith struggle to find Jesus in the world, neither politics, business, nor familiar surroundings seem to “quench the thirst,” he said. And like the women at the tomb who came to anoint the body of Jesus and found it empty, fear pervades before the emptiness, he said.

“This tomb, where thousands of people are seeking God every day, no longer contains the body of the crucified. God is not necessarily where we seek him. It is not in obscure and isolate corners, it is right beside us, in our brother and sister, in our neighbor,” he said.

Patriarch Twal also recalled the plight of hundreds of thousands of refugees and internally displaced people in the Middle East. He said that “contemporary martyrs continue to bear witness to the resurrection of Christ,” even though political leaders and the international community seem less concerned with people’s freedom.

In their April 1 Easter message, the heads of Christian churches in Jerusalem noted the hope which springs from Jerusalem as a Holy City.

“In the face of so much that threatens to devalue or diminish human life, the hope that springs from the Resurrection is rooted here in Jerusalem,” they said. “The message of Easter has shaped the very identity of this holy city over many centuries. Here is located the site of the empty tomb, the place where God’s sovereignty over death and the powers of darkness was manifested in the raising of Jesus from the dead.”

Citing attacks on ancient Christian and other minority communities in Egypt, Iraq and Syria, the leaders expressed concern with the excessive violence used in the name of religion in parts of the Middle East and elsewhere.

“There is no true religion which advocates violation of the human person or the victimization of minority groups in society and we condemn such actions in the strongest possible terms. Those who engage in such barbaric behavior dehumanize not only their victims, but themselves,” the leaders said.