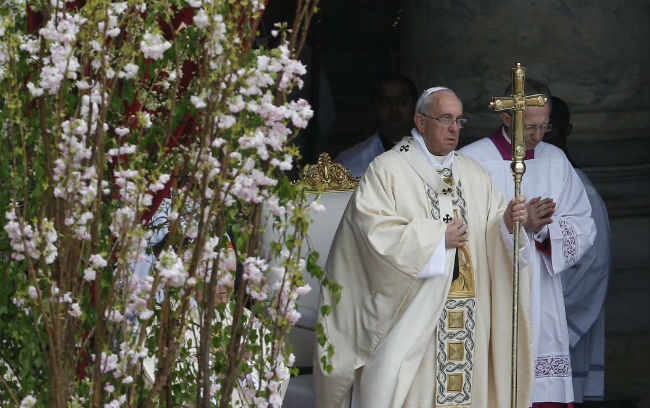 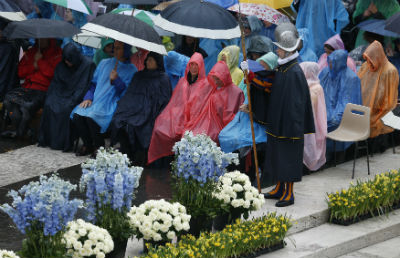 VATICAN CITY (CNS) — To enter Christ’s empty tomb like the disciples and see that he has risen, Christians today also must “bend down,” Pope Francis said in his Easter message.

“Love has triumphed over hatred. Life has conquered death. Light has dispelled the darkness,” he told tens of thousands of rain-drenched pilgrims in St. Peter’s Square April 5.

Rain fell and fell hard throughout most of the outdoor Mass. While most people had umbrellas, their flimsy plastic ponchos were no match for the wind and downpour. The ciboria used to distribute Communion to the crowd were covered with plastic wrap, only partially pulled back when the faithful approached.

Still, they stayed for the Mass and for the pope’s solemn Easter blessing “urbi et orbi” (to the city and the world).

Pope Francis did not give a homily during the morning Mass, but his Easter message before the blessing picked up a theme he had begun at the Easter vigil the night before: The mystery of Easter cannot be understood — and the Christian faith cannot be lived fully — without humility.

“By his death and resurrection, Jesus shows everyone the way to life and happiness: this way is humility, which involves humiliation,” Pope Francis said. “This is the path which leads to glory. Only those who humble themselves can go toward the ‘things that are above,’ toward God.” 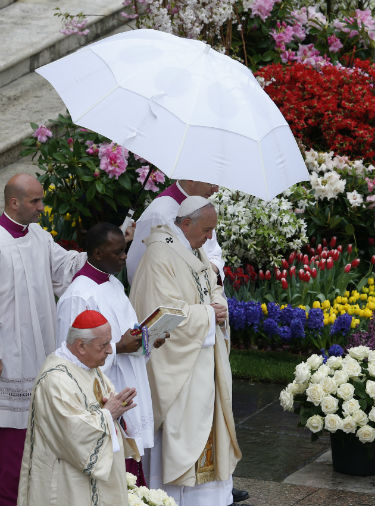 To enter into the mystery of God’s love, he said, “we need to ‘bend down,’ to abase ourselves. Only those who abase themselves understand the glorification of Jesus and are able to follow him on his way.”

Obviously, he said, that often involves being countercultural. Instead of putting ourselves first, he said, “Christians, by the grace of Christ, dead and risen, are the seeds of another humanity, in which we seek to live in service to one another, not to be arrogant, but rather respectful and ready to help.”

“This is not weakness, but true strength!” the pope said. “Those who bear within them God’s power, his love and his justice, do not need to employ violence; they speak and act with the power of truth, beauty and love.”

As is traditional for the “urbi et orbi” message, Pope Francis offered prayers for an end to war and violence in specific countries, mentioning by name Syria, Iraq, the Holy Land, Libya, Nigeria, South Sudan, Congo, Yemen and Ukraine.

In better news, the pope said, “in hope, we entrust to the merciful Lord the framework recently agreed to” in order to prevent Iran from developing a nuclear weapon. The pope prayed that it would be “a definitive step toward a more secure and fraternal world.”

As he had at every Holy Week and Easter service, Pope Francis offered special prayers for persecuted Christians, asking that “Jesus, the victor over death,” would ease their suffering.

Pope Francis’ Easter celebrations began in the dark of a rainy night April 4 in the atrium of St. Peter’s Basilica. Hot embers glowed until the Easter fire was lit and with it the paschal candle. As a deacon carried the candle into the church, Pope Francis followed with a large taper.

Although only the pope and the deacon had candles, the basilica was aglow with smartphone and tablet displays as people tried to get photos. However, as the pope neared the front of the basilica, the congregation — mostly nuns, priests, bishops, cardinals and ambassadors close to the altar — was more disciplined and the impact of scattered lit candles grew.

While the pope was busy with the Easter liturgies, he sent Archbishop Konrad Krajewski, the papal almoner, out to the city’s train stations, shelters and streets with Easter cards for the homeless. He handed out about 300 envelopes, each of which included an undisclosed amount of money.

During the Easter vigil Mass, Pope Francis baptized, confirmed and gave first Communion to 10 people, who ranged in age from 13 to 66. Four were Italian, three were Albanian and one each came from Cambodia, Kenya and Portugal.

Pope Francis rubbed the chrism oil all over their foreheads and, during the confirmation rite, tenderly gave each one a kiss on the right cheek.

The youngest of the new Catholics — Champa Buceti, a 13-year-old Cambodian, and Francesco Comegna, a 28-year-old Italian — brought up the gifts at the offertory. 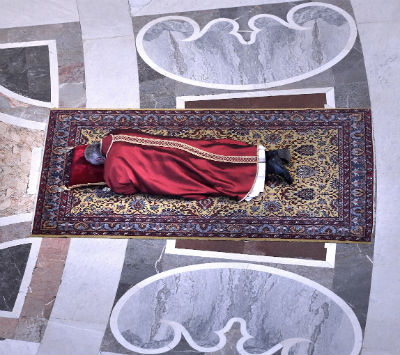 As with his “urbi et orbi” message, Pope Francis’ homily during the Easter vigil, which lasted just over two and a half hours, focused on the humility required of Christians.

The only way to enter into the Easter mystery, he said, is with humility, “to come down from the pedestal of our ‘I’ which is so proud, of our presumption; the humility not to take ourselves so seriously, recognizing who we really are: creatures with strengths and weaknesses, sinners in need of forgiveness.”

“It is good for us, on this vigil night, to reflect on the experience of the women” who went to Jesus’ tomb Easter morning to anoint his body, he said. Entering the tomb is to enter “into the mystery which God has accomplished with his vigil of love.”

“We cannot live Easter without entering into the mystery. It is not something intellectual, something we only know or read about,” he said. “It is more, much more!”

Entering the mystery means being able “to wonder, to contemplate; the ability to listen to the silence and to hear the tiny whisper amid great silence by which God speaks to us.” 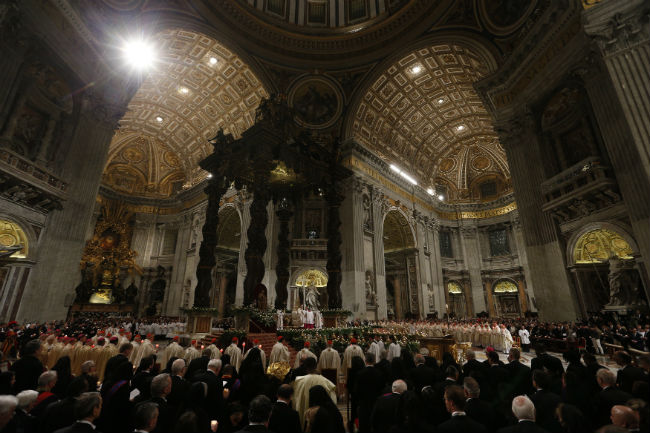 NEXT: Latin Patriarch urges Christians to help light of peace emerge from war