Nuns, priests in Congo call for end to ongoing genocide 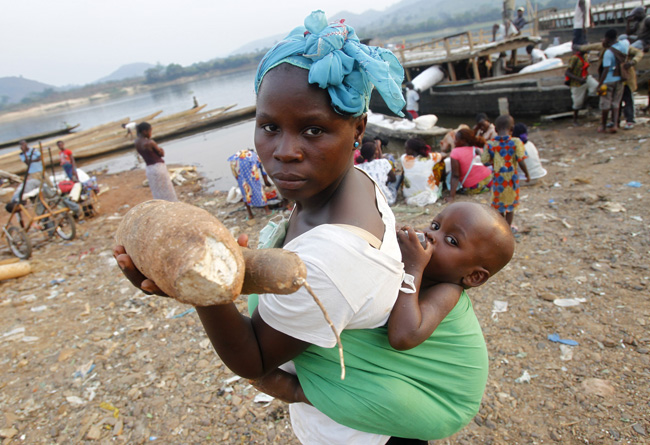 A woman sells cassava on the banks of the Ubangi River near the border between the Central African Republic and the Democratic Republic of Congo, where violence has intensified. (CNS photo/Legnan Koula, EPA) 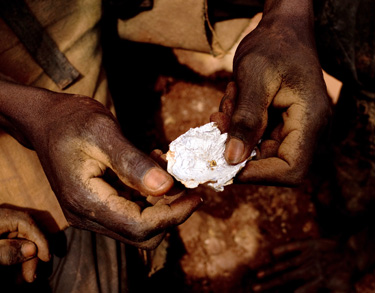 A mineworker in Chudja, Congo, shows a small piece of gold found after water processing in this June 2009 file photo. Rebel factions are competing for access to the country’s gold and other natural resources, leading to violence. (CNS photo/Marc Hofer, EPA)

ROME (CNS) — The brutal kidnappings and killings in Congo must stop, and the church can help by reaching out to the “perpetrators and accomplices” of the violence, said members of several religious congregations working in Congo.

Hundreds of innocent children and adults have been kidnapped and “butchered” in nighttime raids by armed men in the northeastern area of Beni, said a written statement by members of the general councils of 10 religious orders and congregations that are present in the Diocese of Butembo-Beni.

The nature of the killings “is heinous, inhuman and senseless,” they wrote in a joint statement published by Vatican Radio April 8.

Villages have been pillaged while “victims were killed brutally with machetes, knives or axes,” it said. Women, even those who were pregnant, “were raped and disemboweled,” it said.

Tens of thousands of people have been displaced by the wave of violence, which began in October and spread to the Diocese of Bunia in January.

The displacement and unrest have led to food shortages, interrupted schooling and health care services, and the upheaval or destruction of families, the statement said.

“Clearly the people of the (Congo) have suffered for too long. They continue to live in insecurity, instability and poverty even though their country is blessed with rich natural resources to which only the greedy and the armed have access,” the religious wrote.

The past decade has seen renewed fighting in the eastern part of Congo as various rebel factions compete for strategic and mineral-rich portions of the country.

“The church must bring its pastoral concern to the victims as well as to the perpetrators of these atrocities. This genocide among brothers must come to an end,” the statement by the religious congregations said.

“The brutality of these killings reveals the depth of sin in the hearts of its perpetrators and accomplices. The ministry of the church must reach out to them as well.”

They urged their fellow religious members and other Catholics to “redouble your efforts in the work of forming consciences, of education the whole person, and of promoting justice, reconciliation, healing and peace.”

Religious men and women must show the hope and joy that comes from knowing Christ and be an example of love, solidarity and generosity “that shows that ethnic differences are a source of strength and goodness and not of division and hatred.”

“We are committed to getting the news out about the deteriorating situation in the DRC” and to reaching out to other international religious and human rights organizations, they said.

NEXT: Do more to help the poor, pope tells leaders of the Americas