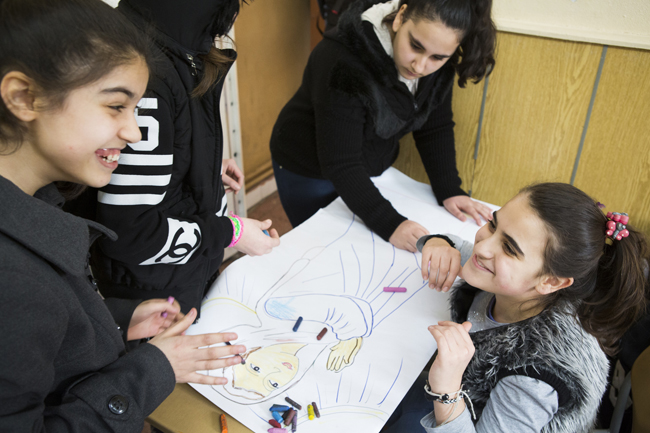 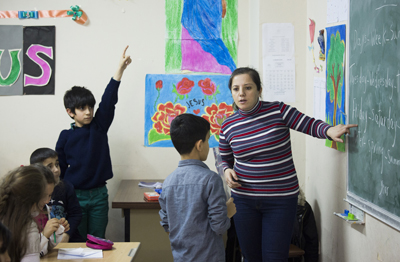 Iraqi refugee Basima Toma teaches English class March 24 at Don Bosco youth center in Istanbul. Like Toma, most of the teachers at the school are refugees or asylum seekers. (CNS photo/Elie Gardner)

Toma and her family have been in Istanbul long enough to see each of these seasons come and go, more than once. In 2012 Toma, her husband and four children left their home in Baghdad.

Toma and her family are Chaldean Catholics. In Baghdad, as Christian-owned businesses were targeted and destroyed, Toma worried more and more for her children’s safety. One of her daughters was the only Christian in her classroom.

“Now I don’t fear for my children,” Toma says. “I put my head on my pillow and am not afraid when they are not with me.”

“Here we don’t ask anyone what religion they are or what political party they belong to,” said Salesian Father Andres Calleja Ruiz, head of the Don Bosco youth center. “We just want to help them.”

The Istanbul center was started 20 years ago as a temporary response to the wave of refugees coming from Iraq. Conflict in the region continues, and new refugees and asylum seekers arrive every day. Today, 300 children, mostly from Iraq and Syria, are enrolled at the center.

The center is primarily funded by donations to the Salesian Mission in Bonn, Germany, and students attend at no cost. 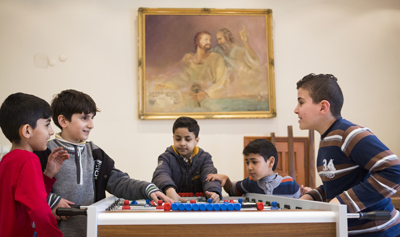 Like Toma, most of the teachers at the center are refugees or asylum seekers. Father Calleja says this helps the youth because the teachers have lived the same situation and understand what the students have suffered. They also speak Arabic.

While the young people study English, math and computing, Father Calleja said, the center is also “a center of joy, where children can play and sing.”

Sarah Mohammed, 14, left her home in Aleppo, Syria, about one year ago. After an explosion near her school, the students were told not to come to class anymore: It was not safe.

“Many of them have never been in school, or they have been very irregular going to school because of the wars,” Father Calleja said. “We try to give them some regularity so that after one, two or three years when they reach some other country, they haven’t lost the continuity of school.”

Sarah said she loves to study. She speaks English and has also learned Turkish. She dreams of being an engineer and attending college.

While Sarah and her younger sister are enrolled at Don Bosco, their 17-year-old brother works 12 hours a day in a bakery to help support the family.

The U.N. Human Rights Council reports that the number of refugees and asylum-seekers in Turkey is expected to hit 1.9 million in 2015.

For most refugees and asylum seekers, Turkey is only a stopping point, a purgatory they pass on the way to new lives in Australia, Canada, the United States and Europe.

While Toma worries less for her family’s safety, she said she worries more about paying the bills. Compared to Iraq and Syria, Istanbul is an expensive city, with limited work opportunities for refugees and asylum seekers.

After more than two years in Istanbul, she is still not sure where her family will be resettled or when they will go. She said she prays they will be granted asylum in Canada, where most of her relatives are already living.

“I believe God sees us, and that he’s knows what’s best for my family,” Toma said.

She added that her dream is simple: She wants a small house with nice furniture and for her children to attend college.

Father Calleja said he hopes and prays that the wars finish and people can live in peace. Until then, he believes the center serves a critical need.

“The group environment and the environment of joy, freedom and tolerance is already healing many wounds,” Father Calleja said.

NEXT: Nuns, priests in Congo call for end to ongoing genocide