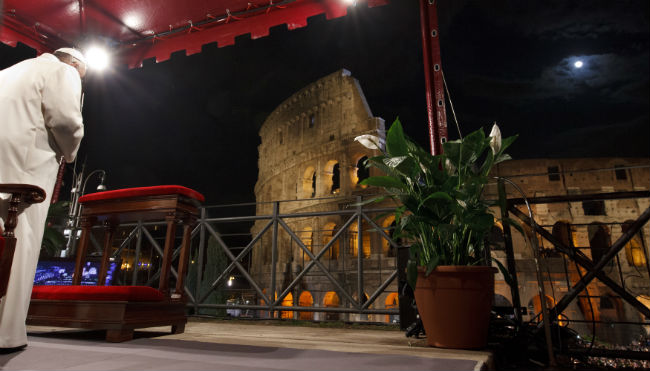 Pope Francis presides at the Way of the Cross outside the Colosseum in Rome April 3. (CNS photo/Paul Haring) 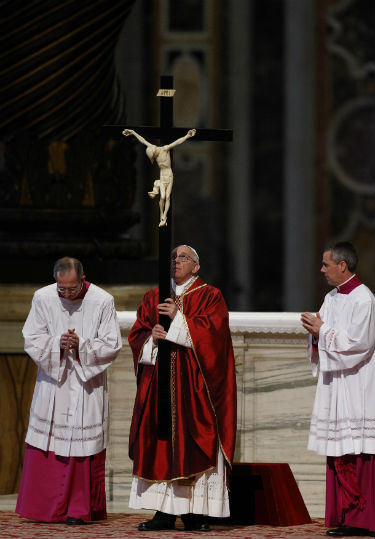 VATICAN CITY (CNS) — Widespread indifference to the violent persecution of Christians and other communities suggests the world is full of Pontius Pilates who eagerly wash their hands of all responsibility, the papal preacher said.

How many times the world witnesses other examples of “ecce homo” — “behold the man” with so many “prisoners that find themselves in the same situation as Jesus in Pilate’s Pretorium: alone, shackled, tortured, at the mercy of rough soldiers filled with hate,” Capuchin Father Raniero Cantalamessa said during the Liturgy of the Lord’s Passion.

“Jesus is in agony until the end of the world in every man and woman who is subjected to his same torments,” he said in his homily during the April 3 service in St. Peter’s Basilica.

Presided over by Pope Francis, the service commemorates Christ’s death on the cross.

The pope began the rite after a silent procession down the central nave. Two assistants helped him kneel to lie prostrate on the floor before the main altar in silent prayer, a sign of adoration and penance.

During the veneration of the cross, after the homily, the pope removed his red chasuble and, in a sign of penance, placed a red stole over his shoulders, bowed three times and kissed the cross. Deacons, cardinals, bishops and religious then processed before the cross to genuflect and then kiss Christ’s feet.

Following tradition, the homily was delivered by Father Cantalamessa, preacher of the papal household. 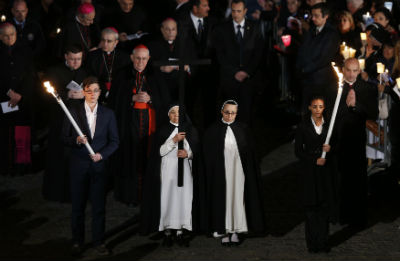 People participate in the Way of the Cross presided at by Pope Francis outside the Colosseum in Rome April 3. (CNS photo/Paul Haring)

He said the continued carnage in the world, including the “homicidal violence” against Christians and others shows the continued cruelty of which humanity is capable.

The Capuchin priest recalled that one Italian commentator had “the courage to denounce the disturbing indifference of world institutions and public opinion” concerning the current wave of people being persecuted for their faith.

“All of us — organizations and people of the western world — risk being Pilates who wash their hands,” he said.

“The problem of violence plagues us, shocks us as it has invented new and frightening forms of cruelty and barbarity today,” he said.

Even though critics may point to Old Testament accounts of aggression, Christianity insists that no one can kill in the name of God, he added.

“Jesus overcame violence not by opposing it with greater violence but by enduring it and exposing all its injustice and futility.”

Christ — victor because victim — ushered in a new kind of victory that definitively conquered evil, he said.

The reason violence and death were tolerated by God in the Old Testament, he said, can be found in Jesus’ response to the Pharisees concerning why Moses allowed divorce even though what God has joined together, no human being must separate.

Jesus said concessions had been made, not to the law, but “because of the hardness of your hearts.” God tolerated polygamy, divorce and other things while guiding sinning people along a lengthy path toward a new “creation” with a new Adam in Christ to restore God’s original plan, the priest said.

With his passion and crucifixion, Jesus showed his “infinite generosity” not just by accepting his fate, but by forgiving “his most relentless enemies” and defending them before God.

“To forgive with the same greatness of soul does not entail just a negative attitude through which one renounces wishing evil on those who do evil; it has to be transformed instead into a positive will to do good to them” with the hope they will be led to the truth and stop harming themselves and others, he said.

The Lord not only left his example and the command to forgive, he said, he also obtained through his death the grace that enables people to forgive and he “poured out for you rivers of mercy” to share with the world.

Christ on the cross “delivers a definitive ‘no’ to violence, opposing it not just with non-violence, but with more: with forgiveness, meekness and love.”

“If violence still goes on, it can no longer, even remotely, refer back to God and cloak itself in his authority. To do so would mean to make the concept of God revert back to primitive and crude stages in history that have been surpassed by the religious and civilized conscience of humanity.

“True martyrs of Christ do not die with fists clenched but with their hands together in prayer,” Father Cantalamessa said, recalling the death of 21 Coptic Christians who were murmuring Jesus’ name as their militant captors murdered them.

The cross was to be carried by a different group of people for each of the 14 stations. The groups included three Italian families as well as lay Catholics and religious who live in Iraq, Syria, Egypt, Nigeria, China and the Holy Land.

The meditations, written by a longtime spiritual director, 79-year-old Bishop Renato Corti, reflected on how God protects his people and calls everyone to watch over one another. 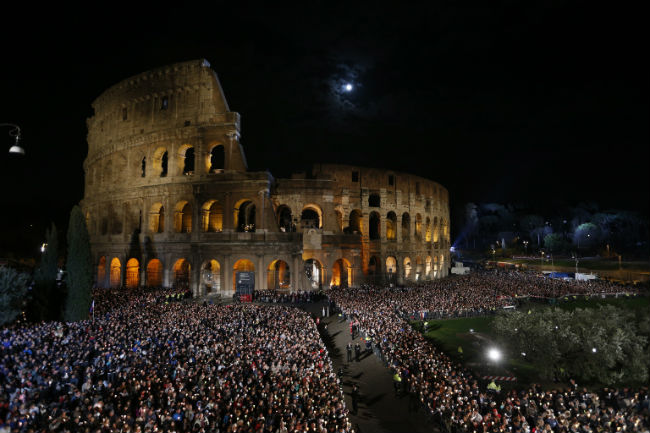 The moon is seen over Rome’s Colosseum April 3 as Pope Francis leads the Good Friday Way of the Cross. (CNS photo/Paul Haring)

PREVIOUS: Pope asks prisoners to pray that Christ make him a better servant

NEXT: Christian faith cannot be lived without humility, pope says at Easter