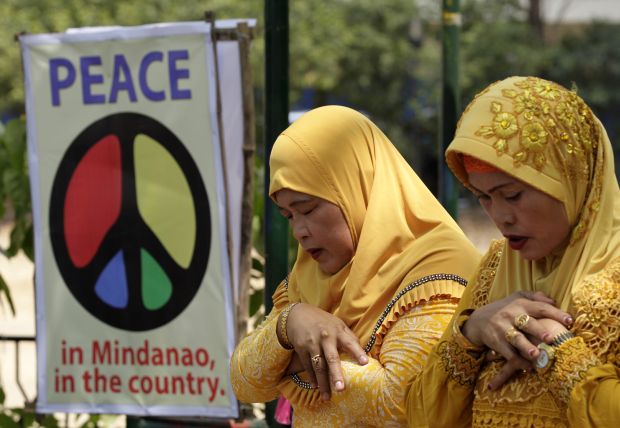 Muslims pray during the "All-Out-Peace" campaign in Manila, Philippines, March 6. Cardinal Orlando Quevedo of the Cotabato Archdiocese, whose population is half Muslim, announced the formation of a separate organization, "Friends of Peace," April 6 in Manila. (CNS photo/Ritchie B. Tongo, EPA)

MANILA, Philippines (CNS) — A Philippine cardinal has pooled a team of peace advocates to help push legislation that would see the creation of an autonomous region in the Muslim-majority section of Mindanao Island.

Cardinal Orlando Quevedo of the Cotabato Archdiocese, whose population is half Muslim, announced the formation of “Friends of Peace” April 6 in Manila. It includes more than 30 individuals, peace advocacy groups and nongovernmental organizations.

“Our concern, as friends of peace, is how to restore a certain amount of sobriety, moderation and rationality as well as objectivity in order that legislators can look at the BBL (Bangsamoro Basic Law) very closely on its own merits, reading closely the provisions,” said Cardinal Quevedo.

Lawmakers had already started preliminary hearings on the proposed Bangsamoro Basic Law before the end of last year, but those talks stalled after a botched police operation Jan. 25 to capture internationally suspected terrorists resulted in a deadly battle between commandos and Muslim rebel factions. Forty-four of the raiding force died, while 17 Moro Islamic Liberation Front fighters and four civilians were also killed in the 18-hour fight.

The government and the Front signed a peace agreement last year after 17 years of negotiations, and a years-long cease-fire between them was broken during the clash.

Various investigations into the event show the commandos entered the rebel community inside Mamasapano town without any prior warning, as is required by terms of the cease-fire agreement. Investigations also found that, by design, only a handful of people knew about the police operation, presumably to keep the operation from being compromised.

The incident raised doubt about sincerity on the part of each side to pursue peace. It also caused lawmakers to question the law, citing certain facets of the clash.

“How can the same issues not labeled so badly in December now be labeled as ‘divisive’ and ‘leading to independence’ and (are) now being used to pillory both (peace) panels?” asked Amina Rasul-Bernardo, president of Philippine Center for Islam and Democracy and member of the Friends group. “So I think we should take a step back and just divorce it from Mamasapano and take a look at the draft BBL.”

Cardinal Quevedo said members of the group would be meeting individually with lawmakers whose opposition to the proposal became magnified after the clash. Citing his role as a cardinal, he said he would not personally participate in those talks. He also said the group was studying a proposal to have families of the fallen commandos meet with loved ones of the rebels that died. He also extended an invitation to Manila-based media to visit the site of the clash and Muslim areas in the South to learn the residents’ stories firsthand.

“We are working very hard … everybody is working very much. So I think there is a great chance of passing the BBL,” Iqbal said.

He said a “watered-down version” of the bill would not be acceptable because it would not be true to the multiple agreements signed in the past years that the rebels feel address their pursuit of self-determination.

NEXT: Bishops urge Kenya to increase security after terror attack