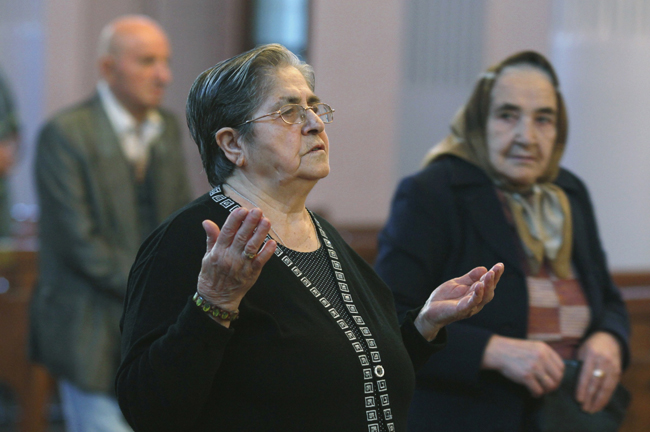 A member of Turkey's Armenian community prays during a service at the Surp Asdvadzadzin Armenian Orthodox patriarchal church in Istanbul, Turkey, in a 209 file photo.(CNS photo/Murad Sezer, Reuters)

VATICAN CITY (CNS) — In the run-up to the 100th anniversary of the Armenian genocide, Pope Francis decried humanity’s ability to systematically exterminate its own brothers and sisters.

He asked that God’s mercy “help all of us, in the love for the truth and justice, to heal every wound and expedite concrete gestures of reconciliation and peace among nations that still are unable to come to a reasonable consensus on interpreting such sad events.”

The pope’s remarks came during a meeting at the Vatican April 9 with a group of bishops from the Armenian Catholic synod. The bishops were in Rome, together with numerous priests, religious and lay faithful, to take part in a liturgy April 12 that was to be concelebrated by Pope Francis and Armenian Catholic Patriarch Nerses Bedros XIX Tarmouni.

April 24 will mark the commemoration of the 100th anniversary of the Armenian genocide. An estimated 1.5 million Armenians — more than half the Armenian population at the time — died in a forced evacuation from their traditional territory in the Ottoman-Turkish Empire from 1915 to 1918. Turkey rejects the accusation of genocide, saying the deaths were due largely to disease and famine.

The Armenian genocide has not received universal recognition. Some governments, such as Belgium, France, Cyprus, Canada and Russia, have adopted resolutions affirming events, while others, including the United States, have not formally recognized the genocide. Papal speeches and the Vatican have not used the term “genocide” when referring to the tragedy.

Pope Francis’ written speech to the bishops said the human heart was capable of “unleashing the darkest forces, capable of going as far as systematically planning the annihilation of its brother, to consider him an enemy, an adversary or even someone devoid of the same human dignity.”

However, “for believers,” reflecting on the evil waged by humankind leads to “the mystery of the participation in the redemptive Passion” as many Armenians continued to proclaim their belief in Christ even to the point of “bloodshed or death caused by starvation in the interminable exodus they were forced into,” he said.

Pope Francis recalled how Pope Benedict XV intervened by asking the Sultan Mehmed V “to end the massacres of the Armenians.”

He also noted “with sadness” how those who survived the forced expulsions 100 years ago flooded to neighboring regions, which today are seeing their Christian presence put into danger once again.

The suffering of the Armenian people in a certain sense is an extension of Christ’s passion, he said, and as such gives way to the hope and joy of his resurrection.

It is up to Armenian Catholic leaders to help the faithful “know how to read reality with new eyes” and be able to not just remember the past, but to draw from it new energy “to nourish the present with the joyous proclamation of the Gospel and with the witness of charity,” he said.

The pope noted how Armenia is considered the first country to have accepted Christianity as its state religion in 301 A.D. and how it has been able to pick itself up again “after so much persecution and trials.”

He invited the Armenian community always to look to the Lord and “to ask God for the gift of the wisdom of heart; the commemoration of the victims 100 years ago places us, in fact, before the shadows of the ‘mysterium iniquitatis’ (the mystery of evil).”