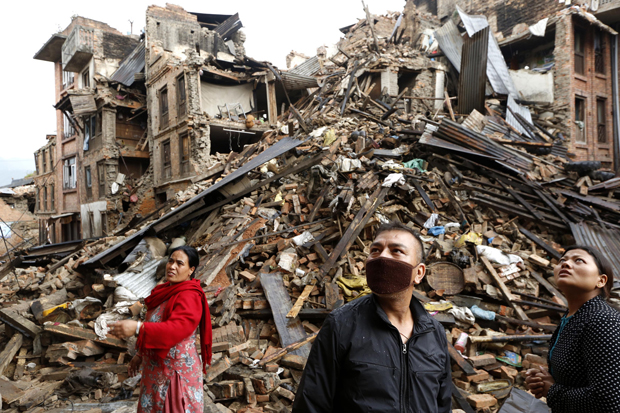 Survivors look at destroyed buildings April 27 following an earthquake in Bhaktapur, Nepal. More than 3,600 people were known to have been killed and more than 6,500 others injured after a magnitude-7.8 earthquake hit a mountainous region near Kathmandu April 25. (CNS photo/Abir Abdullah, EPA)

VATICAN CITY (CNS) — Pope Francis offered his prayers to all those affected by a deadly earthquake in Nepal and encouraged rescue and emergency workers in their efforts.

More than 3,600 people were known to have been killed and more than 6,500 others injured after a magnitude-7.8 earthquake hit a mountainous region near Kathmandu April 25. The devastation included not just buildings collapsing from the tremors, but also people and villages being buried by landslides and avalanches triggered by the quake and aftershocks. The number of casualties was expected to be much higher as rescue teams tried to make their way into more remote areas.

NEXT: No boring homilies, pope tells new priests at ordination