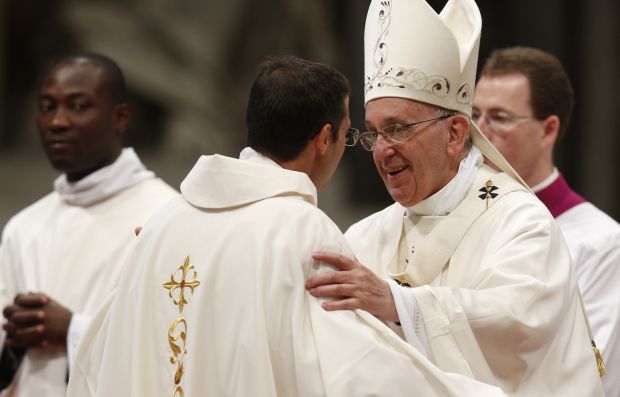 Pope Francis greets one of 19 new priests during an ordination Mass in St. Peter’s Basilica at the Vatican April 26. In his homily, the pope told the new priests to make sure their homilies were not boring. (CNS photo/Paul Haring)

VATICAN CITY (CNS) — Ordaining 19 men to the priesthood, Pope Francis not only told them to make sure their homilies were not boring, but he offered them advice on how to ensure their preaching would touch people: speak from your heart.

Celebrating the Mass April 26, the World Day of Prayer for Vocations, Pope Francis planned to use the set homily given in the ritual book for priestly ordinations; but as he has done in the past, he added his own reflections as well, including his homily tips.

The prepared homily speaks of the effectiveness of a holy priest’s example. The pope added, “examples edify, but words without examples are empty words, they are just ideas that never reach the heart and, in fact, they can harm. They are no good!”

Pope Francis told the thousands of people gathered for the Mass in St. Peter’s Basilica that the men were accepted and put forward by their bishops. “And the bishop risks — he risks! — and chooses them, just as the Father has risked for each one of us.”

Reading the prepared homily’s exhortation for priests to be mindful always of the mystery they celebrate when they preside at Mass, Pope Francis told them, “Never rush it!”

And, he read, you will bring new faithful into the people of God through baptism. But he added, “never refuse baptism to those who request it.”

In the sacrament of reconciliation, he said, “you will remit sins in the name of Christ and of the church. And I — in the name of Jesus Christ the Lord and his spouse, the holy church — ask you never to tire of being merciful. You will be in the confessional to forgive, not to condemn. Imitate the Father who never tires of forgiving.”

A priest, the prepared homily says, must be intent only on pleasing God and not himself. “It is ugly to see a priest who lives to please himself, who acts like a peacock” strutting around, the pope said.

After they had knelt before him and he placed his hands upon their heads, the 19 were vested as priests. They again went up to the pope and he lavished oil all over their palms, consecrating their hands.

Moving to the window of the Apostolic Palace for the midday recitation of the “Regina Coeli” prayer, Pope Francis brought two of the newly ordained priests with him to thank people for their prayers and to offer a blessing with him.

The pope spoke briefly about the day’s Gospel reading about Jesus as the Good Shepherd. “The bad shepherd,” he said, “thinks about himself and exploits the sheep. The good shepherd thinks about the sheep and gives himself for them.”

The only aim of a good shepherd, the pope said, is “that of leading, nourishing and protecting his sheep.”

By sending Jesus to lay down his life for all humanity, he said, God showed the depths of his love for each person. “His is the highest and purest kind of love because it is not motivated by any need, it is not conditioned by any calculation” and is not looking for anything in return.

“It is not enough to contemplate and thank him,” the pope said. “We must follow the Good Shepherd. In particular, those who have the mission of guiding in the church — priests, bishops, popes — are called to not assume the mentality of a manager, but that of a servant in imitation of Jesus.”