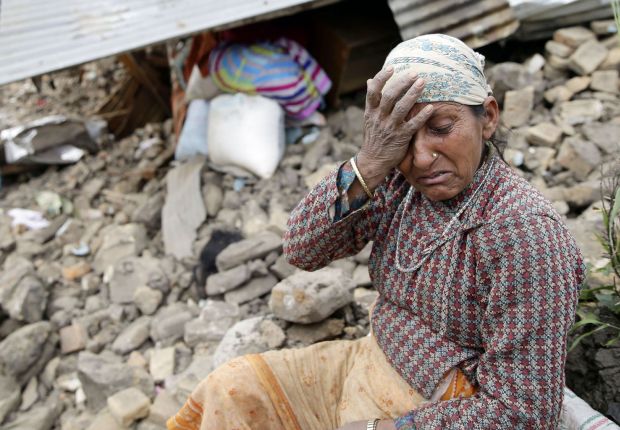 A woman mourns near the body of her 10-year-old daughter outside her destroyed home April 27 on the outskirts of Kathmandu, Nepal. More than 4,300 people were known to have been killed and an estimated 1 million people were left homeless after a magnitud e-7.8 earthquake hit a mountainous region near Kathmandu April 25. (CNS photo/Narendra Shrestha, EPA)

VATICAN CITY (CNS) — Pope Francis offered his prayers to all of those affected by a deadly earthquake in Nepal, encouraged rescue and emergency workers in their efforts and sent an initial donation of $100,000.

More than 4,300 people were known to have been killed and an estimated 1 million people were left homeless after a magnitude-7.8 earthquake hit a mountainous region near Kathmandu April 25. The devastation included not just buildings collapsing from the tremors, but also people and villages being buried by landslides and avalanches triggered by the quake and aftershocks. The number of casualties was expected to be much higher as rescue teams tried to make their way into more remote areas.

The Pontifical Council Cor Unum, which promotes and coordinates charitable giving, announced April 28 that Pope Francis had sent “a first contribution of $100,000” to assist the victims.

The money, it said, “which will be sent to the local church, will be used to support the assistance efforts underway on behalf of the displaced” and others impacted by the quake.

The papal donation is meant to be “a first and immediate concrete expression” of the pope’s personal concern for all the quake’s victims, Cor Unum said, adding that bishops’ conference and Catholic charities from around the world already have taken an active role in helping survivors.

NEXT: Pope tells Portuguese bishop he hopes to visit Fatima in 2017