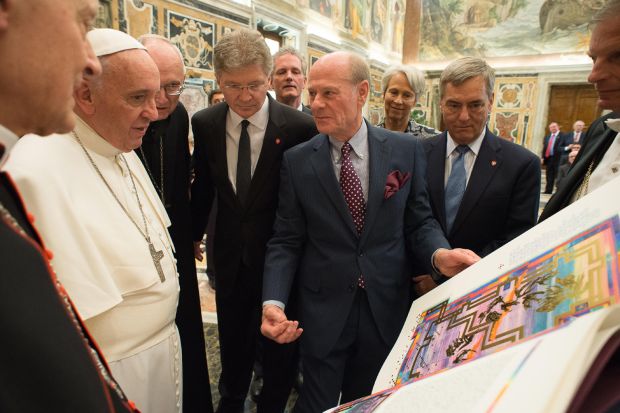 VATICAN CITY (CNS) — Military tanks, oil derricks and cancer cells are among the contemporary depictions of the afflictions prefigured by the Four Horsemen of the Apocalypse in a fine-art edition of the Book of Revelation given to Pope Francis.

The last of the seven-volumes that comprise The St. John’s Bible was presented to the pope April 17, at the end of his annual audience with the U.S.-based Papal Foundation. The last volume includes the Book of Revelation and the Epistles.

The St. John’s Bible, renowned for its handwritten text and vibrant illuminations, is a project of St. John’s Abbey and St. John’s University in Collegeville, Minnesota.

“The original mission and energy behind (the Bible) was to really ignite the spiritual imagination of people in terms of Scripture,” said Benedictine Abbot John Klassen.

The abbot was joined by Donald Jackson, the Bible’s artistic director, Michael Hemesath, the university president, and Cardinal Donald W. Wuerl of Washington, president of the Papal Foundation, for the presentation to the pope.

Pope Francis seemed to appreciate the volume, raising his hands in joy at the visual depiction of the New Jerusalem, said Jackson.

Pope Benedict XVI received the first volume in 2008. The special-edition volumes given to the pontiffs are bound in calf-skin leather and are about 2 feet tall and 3 feet wide when opened; they weigh about 14 pounds each.

Noting that “most people are visual learners,” the abbot said the Bible’s colorful and layered illuminations are intended to stimulate readers’ “own visual imagination” and help them “begin to internalize and be in conversation with Scripture.”

Of the 299 seven-volume sets that have been printed, about 100 have been purchased by individuals and institutions, “not just Roman Catholic … for discussion, interfaith dialogue and prayer,” said Jackson, a Welsh artist, giving as an example the Anglican St. Martin-in-the-Fields Church in London.

The Mayo Clinic in Rochester, Minnesota, also has a St. John’s Bible in a glass display case in one of the hospital’s “busiest thoroughfares,” said Jackson. Hospital staff “turns the page every day and people can look at it there. They really feel it helps in their mission of healing,” he said.

The illuminations include a range of art styles, from classical iconography to more modern abstract renderings. Some images combine styles.

“It is a very contemporary visual depiction of Biblical stories,” said Abbot Klassen. “You would be aware that we live in the 21st century, this is not a medieval Bible.”

Images that represent contemporary science, dress and social crises are woven in with more classical religious imagery. A DNA double helix, for example, is woven into the background of an image representing Jesus’ family tree in the Gospel of Matthew; Jesus is depicted with a halo and blue jeans in the Gospel of Luke to illustrate the Parable of the Sower; also in Luke, the former Twin Towers are rendered in an illumination of the Prodigal Son to communicate Jesus’ radical call to forgiveness; and the impression of stars taken from the Hubble Telescope grace the night sky in an image at the start of the Gospel of John.

While Jackson conceived all of the illuminations, most of the final renderings were the result of a team of artists. The process included briefings Jackson received from a theological committee on what the theological content should be and his “own growing understanding of Scriptures,” he said.

With all of the art work completed and the volumes published, the project, which began in 1998, will continue in “smaller and simpler ways,” said the abbot. However, the goal will always be to offer people opportunities to reflect upon and integrate Scripture in their lives, he added.

Hemesath said the next steps include continuing their displays about the Bible in museums around the world and building a gallery for the Bible project on the university campus.

The Apostles’ Edition of The St. John’s Bible received by the pope was a gift to the Holy See from the Papal Foundation, thanks to a $1 million donation from the Gerald and Henrietta Rauenhorst Foundation. The volumes have been entrusted to the Vatican Museums.

A seven-volume St. John’s Bible with a simpler binding, called the Heritage Edition, was entrusted to the Vatican Library. The latter can be purchased for $165,000. Single illuminations and smaller-sized editions of the Bible are also available at www.saintjohnsbible.org.

NEXT: Catholics call for end to xenophobic violence in South Africa