Catholics call for end to xenophobic violence in South Africa 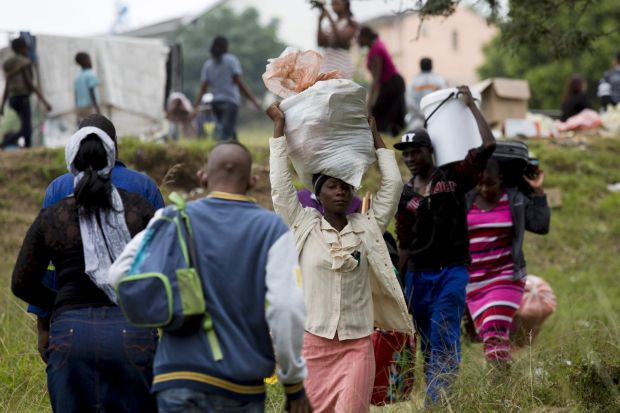 Zimbabwe nationals carry their bags before boarding a bus home from a camp for those affected by anti-immigrant violence near Durban, South Africa, April 19. Attacks on foreign nationals, which have left at least seven people dead and more than 5,000 displaced, started in Durban in early April and spread to other parts of the country. (CNS photo/Rogan Ward, Reuters)

CAPE TOWN, South Africa (CNS) — The Catholic Church in South Africa has called on faith and other communities to use their influence to stop xenophobic violence and urged help for its victims.

Attacks on foreign nationals have left at least seven people dead, more than 5,000 displaced, and shops looted and razed. They started in Durban in early April and spread to other parts of the country.

“As a pastor, as a South African and as a resident of Durban, I am utterly shocked and filled with shame by the violence and intolerance that has overtaken our beloved city,” Cardinal Wilfrid F. Napier of Durban said in an April 17 statement.

Noting church projects that need contributions to help with feeding and finding accommodation for displaced immigrants, the cardinal called on all residents of South Africa “to build bridges and to help move our country forward.”

The xenophobic violence “is deeply disturbing and shamefully embarrassing for the people of South Africa and betrays the whole African continent,” the Johannesburg-based Jesuit Institute said in a statement.

The Zulu king, Goodwill Zwelithini, who called for foreigners to pack their bags and leave, has contributed to the violence through his words, it said. By failing to correct any possible misunderstanding, the king “has morally compromised himself,” it said.

The Jesuits called on “those who are committing these murderous acts to cease immediately,” as well as those who make sweeping and inaccurate statements about foreign nationals and their effects on local communities, for example that they are “stealing our resources.”

Noting that the perpetrators of this violence “are people who worship in our faith communities,” the Jesuits called on religious leaders to find ways of addressing this endemic problem.

“Faith communities have the power to influence and must use this influence to condemn this behavior,” they said, noting that “welcome and hospitality are key concepts throughout the Scriptures.”

The fact that xenophobic violence has continued after 2008 means that the government has failed to “address this scourge through education, dialogue, and other methods of outreach,” the Jesuits said.

More than 60 people were killed and more than 30,000 people were displaced in attacks on foreigners around South Africa in May 2008.

In this “sad and traumatic” time, “we need to make sure that the areas in which we live are places where all feel welcome and safe,” Cardinal Napier said.

“If people have fled our neighborhoods because they felt unwelcome, we need to help them to move back and rebuild their lives,” he said.

“If we know people who do not share our values, we need to challenge them to a ‘conversion of heart’ in which, like the Good Samaritan, we see every person as our neighbor, especially those who are different from us,” he said.

“The xenophobic behavior we have seen and the attitudes that lie behind it do not reflect the majority of people,” Cardinal Napier said, noting that, “We must not allow a few bullies to change how we, as people living in South Africa, see each other and see ourselves.”

As well as financial support for displaced victims of violence, South Africa’s bishops “commit ourselves to pray to God for this situation to be resolved and to be available as agents to broker peace,” the Southern African Catholic Bishops’ Conference said.

“We urge the foreigners and expatriates to avoid being involved in any unfair labor and illegal business practices,” the conference said in a statement issued by its spokesman, Archbishop William Slattery of Pretoria.

Because “there are strong feelings among locals that many foreigners are here illegally and are involved in illegal activities, such as selling drugs, foreigners need to cooperate with local authorities in order to keep a good name for themselves,” Archbishop Slattery said in an April 17 telephone interview.

He added that the church “appeals to all people of goodwill to protect and do all in their power to assist those deprived of their livelihoods — even their lives — in South Africa.”

At the national level, there has been “a deafening silence” in response to xenophobic attacks, said Father Russell Pollitt, director of the Jesuit Institute, noting that South Africa has “a huge deficit in leadership.”

It is “not enough to tell Christians to pray for an end to xenophobic attacks,” he said in an April 17 telephone interview, noting that all faith-based organizations “need to work with our communities to address xenophobia.”

Xenophobia “has deep roots and relates to the anger in South African society,” Father Pollitt said.

“People were looking for change” when the first post-apartheid government was elected in 1994, “and they have been let down and are still living in squalor,” he said.

“As church, we haven’t been speaking out against xenophobia as we should, and we could have done more” to stop its recurrence, he said.

“The Jesuit Institute commits itself to action, with our partners and through our network, to disseminating information and promoting awareness campaigns,” the statement said.

“We commit ourselves to collaborating with all people of goodwill to create a society in which all people are treated with dignity and feel welcome,” it said.

NEXT: Pope: Church is made of martyrs; leaders must respond to victims’ cries