Shroud of Turin on display; city readies for visit by pope, pilgrims 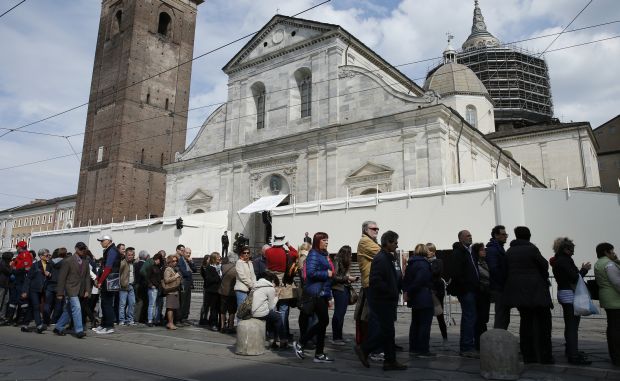 People wait in line outside the Cathedral of St. John the Baptist before the opening of the public exposition of the Shroud of Turin in Turin, Italy, April 19. (CNS photo/Paul Haring)2015.

TURIN, Italy (CNS) — A thin white cloth draped over the glass-covered Shroud of Turin was pulled down and billowed to the floor, marking the official opening of the venerated icon’s exposition to the public.

The unveiling came during a Mass held in the city’s cathedral of St. John the Baptist April 19 in the presence of a small group of dignitaries, religious and lay faithful.

“We have put ourselves in the wake of generations of pilgrims” who come to contemplate the shroud, and “it will do us good to feel like we are drops in the river … of a humanity in need of God, of his affectionate mercy,” Archbishop Cesare Nosiglia of Turin, papal custodian of the shroud, said in his homily.

(See a related story on the meaning on the shroud — beyond questions of its authenticity — and watch a video.)

Pope Francis authorized the public display of the shroud to help commemorate the 200th anniversary of the birth of St. John Bosco, a 19th-century priest from the Turin region who was a pioneer in vocational education, worked with poor and abandoned children and founded the Salesian order. The pope was scheduled to visit Turin June 21-22 and was to venerate the shroud.

After reciting the “Regina Coeli” prayer in St. Peter’s Square April 19, the pope said he hoped venerating the shroud “may help us all to find in Jesus Christ the merciful face of God and to recognize it in the faces of our brothers and sisters, especially those who suffer most.”

As it was for countless pilgrims over the centuries, the shroud continues to be an invitation to reflect on Jesus’ incarnation, death and resurrection, which in turn inspires and calls people to reach out to others in need, Archbishop Nosiglia said at the morning Mass. “The shroud invites us to never let ourselves be beaten down by evil, but to overcome it with good,” he said.

As people gaze at the image, they no longer feel alone or afraid as soon they can discover “it is not we who are looking at that image,” but it is Christ who is gazing back at them, he said.

The shroud, believed by many Christians to have wrapped the crucified body of Christ, will be on public display through June 24. More than 2 million people were expected to visit, and before the official opening in mid-April, 1 million people had already pre-booked their visit through the archdiocese’s free, but mandatory online and on-site reservation process.

One couple from Paris with their two small children stood disappointed on the flagstone street alongside the long metal barricades that kept them and scores of other visiting foreigners and locals from attending the invitation-only Mass.

The couple, who identified themselves only by their first names, Constance and Hubert, said they were heading to southern France from the Italian Alps and came through Turin as a shortcut.

“I saw on the Internet that today is the first day the shroud is being shown, so we came to see, but we won’t have the possibility,” Constance said, since they hadn’t booked ahead and had family waiting for them.

She said she remembered seeing the shroud as a young girl with her parents and “I have memories of it being like a ‘shock’ when you see it,” trying to find the right word in English for the impact and amazement she felt. She said she wanted her kids and husband to experience the shroud for the first time, too.

Media outlets were given an exclusive preview April 18 when Archbishop Nosiglia had the shroud unveiled for reporters.

Flanked by uniformed members of the Italian military and police forces, the shroud’s high-tech protective case was positioned upright like a large landscape portrait, surrounded by large red velvet drapes and with a small box of green ivy and white tulips below.

At least 100 journalists were perched on a winding three-tiered platform that pilgrims would later use as their viewing stand. They had cameras, mobile devices and eyes focused on the shadowy photonegative image of a man’s bearded face, crossed hands and long body — front and back — on the 14-foot by 4-foot linen cloth.

The man in the image bears all the signs of the wounds corresponding to the Gospel accounts of the torture Jesus endured in his passion and death. Scientists have determined the dark stains around the head, hands, feet and right side are human blood, type AB.

The church supports scientific research concerning the shroud and its possible age and origins — still the subject of heated debate — but it has never officially ruled on the shroud’s authenticity.

Instead, the church invites the faithful to reflect on the shroud’s image as a way to grasp the kind of suffering Jesus endured during his passion and death, and the love for humanity that sacrifice entailed.

Archbishop Nosiglia told the press he hoped the people visiting the shroud would be filled with the hope and courage needed to overcome “every adversity, every difficulty” in life.

Meanwhile, the city of Turin, which has been home to the shroud since 1578, was calmly gearing up for the expected influx of people. The city saw millions come for the last public displays in 1998, 2000 and 2010.

Special maps with religious itineraries, pilgrim assistance centers, and wheelchair-accessible confessionals had been set up to help guide and care for visitors, and some 4,500 volunteers wearing violet vests were at the ready with smiles and helpful information.

Near the cathedral, a wide pedestrian-only boulevard lined with shops and cafes had made room for a long line of white tents offering local crafts and a huge array of religious souvenirs like rosaries, postcards of popes, plates and holographic posters of the shroud and tackier trinkets like plastic Pope Francis bobbleheads and tea towels.

Security had been heightened around the cathedral and high-tech surveillance cameras placed –as they were in 2010 — around the shroud. Before entering the cathedral, visitors must walk through metal detectors and put their bags through X-ray machines.

Given news reports that prominent Christian places in Italy may be potential terrorist targets, organizers urged visitors to combat today’s “culture of fear” with a “culture of welcoming.”

“To celebrate the exhibition of the shroud with serenity means to also say ‘no’ to those who, with violence or fear, want to impose a ‘terroristic’ vision of the world and restrict citizens’ rights and freedoms,” organizers said in a written press release.

NEXT: World remains silent about kidnapped bishops — for 2 years