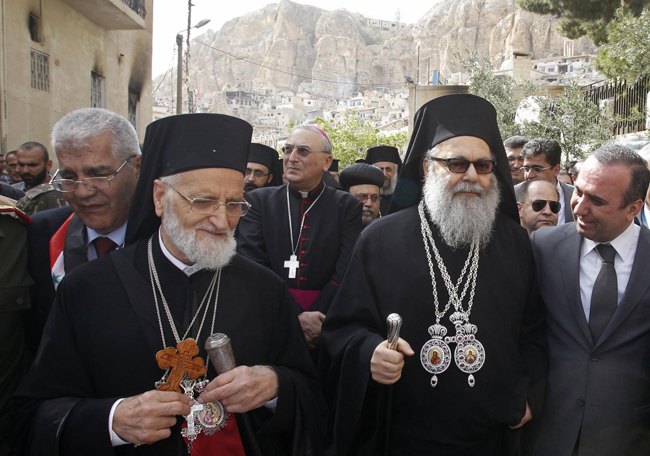 Orthodox Patriarch John X of Antioch and all the East (right) visits the ancient Christian town of Maaloula, Syria, with a delegation April 20. The patriarch condemned the indifference of the international community over the fate of bishops missing for two years. (CNS photo/Khaled al-Hariri, Reuters)

BEIRUT (CNS) — Commemorating the second anniversary of the kidnapping of two Syrian bishops, the Greek Orthodox patriarch lamented the indifference of the international community about their fate.

“We hope that the bishops are alive, but unfortunately the world is silent and nobody has provided physical evidence,” Greek Orthodox Patriarch John X of Antioch said in a statement he read at the conclusion of the Divine Liturgy April 19 at Our Lady of Balamand Monastery in northern Lebanon, near Tripoli.

Patriarch John called for “the whole community and international organizations to mobilize” to inquire about the fate of the missing bishops.

“We tried to negotiate with those who can help in this matter, but unfortunately there was total silence,” he said.

In a joint statement recognizing the second anniversary of the bishops’ kidnappings, Patriarch John and Syriac Orthodox Patriarch Ignatius Aphrem II of Antioch said, “Your wound is our wound, and your pain is our pain, and your tears are our tears and your life is our life.”

“Our (Middle) East,” the patriarchs said, “has become an open arena for all evils.” The aim of the atrocities in the region “is to demolish life in its cradle, shatter civilizations, remove the rudiments of its landmarks, conceal its characteristics, displace man, destroy history and disfigure the identity of God,” they stated.

“Let us shake hands, talk to each other, have peace, reconciliation, mutual understanding, cooperation, and integration. The solution is not achieved by violence, but by multiple forms of dialogue,” they said.

PREVIOUS: Shroud of Turin on display; city readies for visit by pope, pilgrims

NEXT: Pope calls for Catholic-Jewish witness of faith, defense of believers