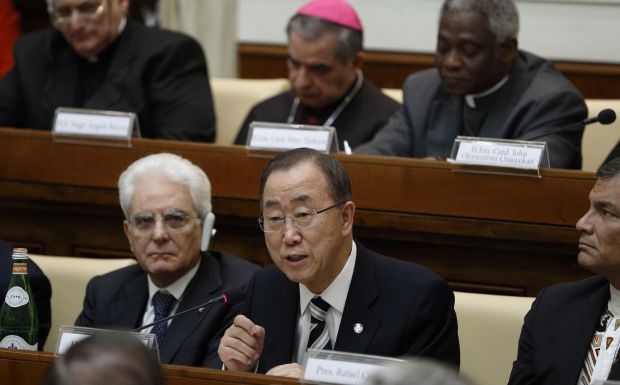 VATICAN CITY (CNS) — Promoting sustainable development and mitigating climate change will take more than just global policies and agreements, it will also take a strong, unified stance from the world’s religions, the secretary-general of the United Nations said at the Vatican.

To have development without destruction and “to transform our economies, however, we must first transform our thinking, and our values. In this, the world’s religions can provide valuable leadership,” U.N. Secretary-General Ban Ki-moon told religious leaders, scientists and scholars.

“If ever there were an issue that requires unity of purpose” among governments, private businesses, civil society and faith-based groups, “it is climate change,” he said, giving the opening address at a Vatican-sponsored workshop April 28.

More than 100 experts, including Nobel laureates, from the world of science, politics, business and academics as well as religious leaders, came together to show support for a global consensus on the urgency of stemming climate change and promoting sustainable development.

Pope Francis, whose encyclical letter on the environment is completed and will be released in the coming months, met with Ban for 30 minutes at the academy before the start of the workshop.

The U.N. leader said they had “a fruitful and wide-ranging conversation” in private and that he thanked the pope for accepting his invitation to address the U.N. General Assembly in New York Sept. 25.

The two talked about climate change and unsustainable development and how they often drive people to migrate in very dangerous situations because they “are looking for a better future.”

Ban told reporters after the meeting that he came to the Vatican for the pope’s “spiritual and moral leadership.”

Ban’s visit was part of a larger effort to get nations to hammer out precise Sustainable Development Goals in New York in September and to come up with a legally binding and universal agreement on climate change at a December meeting in Paris.

Focusing on getting religious leaders onboard was key because climate change and its impact on people’s health, security, food supplies and future make it “a moral issue. It is an issue of social justice, human rights and fundamental ethics,” Ban said.

“Eradicating extreme poverty, ending social exclusion of the weak and marginalized, and protecting the environment are values that are fully consistent with the teachings of the great religions,” he said.

“Pope Francis has been one of the world’s most impassioned moral voices on these issues, and I applaud his leadership,” he said, as he called on all leaders to have their voices heard, too, before the upcoming U.N. meetings.

“Let the world know that there is no divide whatsoever between religion and science on the issue of climate change,” he told faith leaders.

Cardinal Peter Turkson, president of the Pontifical Council for Justice and Peace, which advised the pope in the preparation of his encyclical, said in his opening address that indifference toward or mistreatment of the planet and its resources is linked to the indifference or abuse shown to human beings.

“The lesson from the Garden of Eden still rings true today: pride, hubris and self-centeredness are always perilous, indeed destructive,” he said.

“The very technology that has brought great reward is now poised to bring great ruin,” he said, as “the ever-accelerated burning of fossil fuels that powers our economic engine is disrupting the earth’s delicate ecological balance on an almost unfathomable scale.”

The cardinal said innovative technological and long-term economic solutions would be needed as well as “brave and determined political leadership” that turns away from “a single-minded zeal for accumulation” and “an unthinking infatuation” with national wealth indexes that ignore the human and environmental costs of economic growth.

However, good policy is not enough, he said, because “without moral conversion and change of hearts, even good regulations, policies and targets in the world are unlikely to prove effective. Without this ethical foundation, humanity will lack the courage and moral substance to carry out even the most sensible policy proposals.”

Religious values and principles can help the world “identify what is truly valuable, what we protect and sustain as sacred,” Cardinal Turkson said.

World leaders and local communities “therefore need to cultivate a new set of values and virtues — including conservation of the environment, compassion for the excluded, courage to take bold decisions, and a commitment to work together in common purpose for the global common good,” he said.