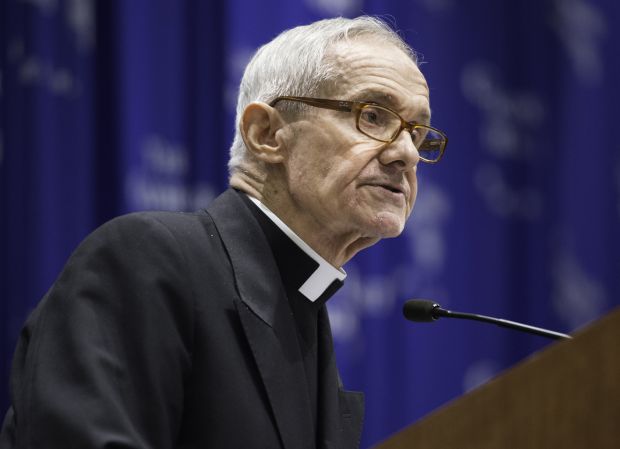 Speaking May 19 about Catholic-Muslim relations, Cardinal Tauran added, “Most of the problems we face are problems of ignorance.”

Cardinal Tauran made his remarks in a keynote address at the conference “‘Nostra Aetate’: Celebrating Fifty Years of the Catholic Church’s Dialogue With Jews and Muslims,” held at The Catholic University of America, Washington, and co-sponsored by the university’s School of Theology and Religious Studies and the U.S. Conference of Catholic Bishops’ Secretariat for Ecumenical and Interreligious Affairs.

The conference was being held to mark the 50th anniversary of the document’s promulgation Oct. 28, 1965.

For Christians entering into dialogue with Muslims, Cardinal Tauran said, they need to understand that Islam is at the same time a religion, a political system and a civilization. “It’s a very complex reality,” he added.

He gave a glimpse into how “Nostra Aetate” came about.

It had been a wish of St. John XXIII that some sort of document along the lines of “Nostra Aetate” be issued during Vatican II, but he died in 1963, before the council could consider it, Cardinal Tauran said. Some delegates to the council did not want to have such a document come up for discussion, he added.

When discussion finally took place, “some bishops from the Middle East were concerned about this problem” that the draft of the document spoke only about the relationship between Catholics and Jews, and that this would not sit well with Muslim civic and religious leaders in the region.

“It soon became clear that ‘Nostra Aetate’ had nothing to do with (the state of) Israel,” Cardinal Tauran said, and the document was modified to include Islam, Buddhism, Hinduism and other faith systems.

“‘Nostra Aetate’ recognizes that there are elements of truth in other religions,” Cardinal Tauran said, echoing the passage in “Nostra Aetate” that declares, “The Catholic Church rejects nothing that is true and holy in these religions. She regards with sincere reverence those ways of acting and of living, those precepts and teachings which, through differing in many aspects from the one she holds and sets forth, nonetheless often reflect a ray of that truth which enlightens all.”

The Pontifical Council for Interreligious Dialogue coordinates and collaborates with other Vatican agencies for interreligious gatherings, according to Cardinal Tauran, such as the day of prayer for peace in Assisi, Italy.

It also takes the lead in organizing dialogues with Muslim bodies worldwide, although one Muslim group unilaterally withdrew its participation in dialogue in 2011, saying that Pope Benedict XVI’s comments about Islam during a controversial speech in 2006 in Regensburg, Germany, was “an insult to Islam.”

The pope had cited a medieval description of the teachings of Islam’s prophet Muhammad as “evil and inhuman,” prompting a wave of Muslim indignation. Later, Pope Benedict offered his regret, saying he was “unfortunately misunderstood,” because he was not agreeing with the polemical criticism of Islam.

“We remain open to dialogue,” Cardinal Tauran said in his talk.

Seyyed Hossein Nasr, a professor of Islamic studies at George Washington University in Washington, responding to the cardinal’s remarks, said his own first encounter with Christian-Muslim dialogue took place in 1957, but that many Muslims initially regarded “Nostra Aetate” with suspicion after it was issued. “Why do those people want to dialogue?” was the common question asked, he said.

It took about a generation for most Muslims to consider entering into dialogue with Catholics, said the 82-year-old Nasr, who emigrated from his native Iran to the United States in 1979.

Muslims also have their own issues to sort out, the ongoing Middle East violence among them, said Nasr, who considers himself a “traditionalist” rather than a fundamentalist or a modernist. When Islam goes too far into the realm of fundamentalism or modernism, it “must return” to its traditionalist roots, he added.

While Cardinal Tauran and Nasr engaged in a question-and-answer session after their remarks, it was the question that didn’t receive an answer that drew the most attention.

A Muslim woman who said she had been in the United States for 30 years asked when Christian-Muslim dialogue was going to move from the province of “cardinals, imams, bishops and clergy” and get to the level of “the people.” While Nasr and Cardinal Tauran stayed silent, the audience answered her question with applause.