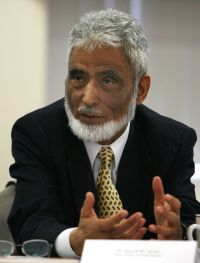 Sayyid M. Syeed, national director of the Office for Interfaith and Community Alliances of the Islamic Society of North America, is seen in this October 2008 file photo. (CNS photo/Tim Hunt, Northwest Indiana Catholic)

WASHINGTON (CNS) — Catholic Church leaders and scholars are not the only ones praising the 50-year-old church document “Nostra Aetate” (“In Our Time”), the Second Vatican Council’s declaration on relations with non-Christian religions.

During the first part of a May 19-21 symposium on the document at The Catholic University of America, it also got high marks from a U.S. Muslim leader who said “Nostra Aetate” helps different faiths “recognize common roots and build a new sense of direction.”

Sayyid Syeed, national director of the Islamic Society of North America’s Office for Interfaith and Community Alliances, said the church document links Catholics, Muslims and Jews by urging them to “promote the values” in their sacred texts.

Today, he said the goal should be “to see ‘Nostra Aetate’ fully reinforced at every level.”

The document, promulgated Oct. 28, 1965, by Blessed Paul VI, has inspired decades of interfaith dialogue, which Syeed described as something that “doesn’t diminish our faith but helps us build an understanding with others.”

Put another way: “We keep our identity but work together,” he said.

Syeed also noted the time frame when the document was being put together, saying it occurred at the height of the civil rights movement in the United States and when there was a concentrated effort to start Islamic centers and Islamic student groups on university campuses in the U.S.

During these “humble beginnings” of Islamic life in the United States, he said the “Catholic Church acted as a big brother” in its understanding of a religious minority.

This sentiment has continued in days since the terrorist attacks of 9/11, he said, when the Catholic Church showed support to Muslims and opened its doors to them amid a growing Islamophobia.

Syeed said it is unfortunate that Americans know so little about Islam but praised Catholic universities for taking a leadership role in changing this on many of their campuses where there are departments of Islamic studies.

Auxiliary Bishop Denis J. Madden of Baltimore, immediate past chairman of the bishops’ Committee on Ecumenical and Interreligious Affairs, said when he speaks about interfaith efforts at parishes he often gets questions about Islam that “can’t be ignored; they are in the air.”

He said the focus of interfaith efforts needs to be what was emphasized in “Nostra Aetate” — the “notion of commonality” — or the realization about what is the same in our faith practices.

That sense was echoed by Archbishop Michael Fitzgerald, former papal nuncio to Egypt and former president of the Pontifical Council for Interreligious Dialogue, who said the Vatican II document points the way to interfaith relationships by stressing in its opening paragraph: “We are conscious we belong to one family.”

He also said interfaith dialogue needs to recognize the importance of freedom of religion. “It’s not enough to say a religious minority can pray at home. No, they have a right to have a place of worship,” he said.

Msgr. Paul McPartlan, a priest of the Archdiocese of Westminster, England, and professor of systematic theology and ecumenism at Catholic University, said the day’s discussion was a great example of how religious leaders can work together.

He said currently in Europe, there is a sense that all religions need to be pushed to the margins because they might offend one another, which he said is a mistake.

“We stand or fall together,” he said, adding that faith groups can do this in friendship and in solidarity.

Msgr. McPartlan also is acting dean of Catholic University’s School of Theology and Religious Studies, which co-sponsored the symposium along with the U.S. Conference of Catholic Bishops’ Secretariat for Ecumenical and Interreligious Affairs.

All of the day’s speakers noted that interfaith work is not over.

Catholic University’s president, John Garvey, said in introductory remarks that it could be “tempting to pat ourselves on the back and say ‘good job’ but this document tells us not to.”

“We must continue to examine the church’s relationship with other faiths,” he said, and also look at what we hope to accomplish through this effort.

“The heart of interfaith dialogue,” he said, “is that “God will make himself better known to us.”