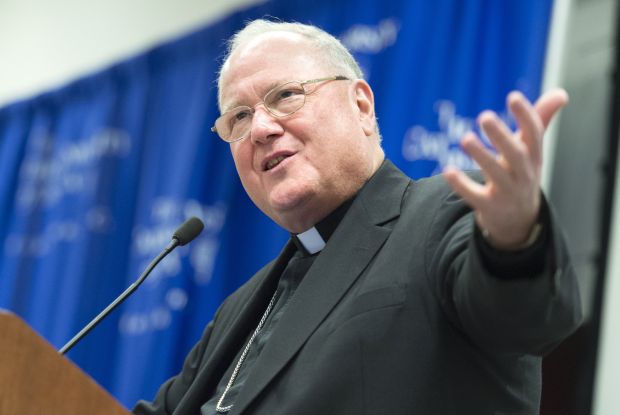 WASHINGTON (CNS) — Through dialogue, Catholics and Jews can find common cause in the concerns that vex leaders of both religions, Cardinal Timothy M. Dolan of New York said May 20 during a forum on the 50th anniversary of the Second Vatican Council document “Nostra Aetate.”

Thanks to “Nostra Aetate,” “Jewish-Catholic friendship has never been stronger,” Cardinal Dolan said in his address, “The Catholic Church’s National Dialogue With Jews Since ‘Nostra Aetate.'” “The brave fathers of the (Second Vatican) Council, aided by Jewish ‘periti’ (experts), could never have envisioned such success five decades ago.”

The success and friendship have been maintained, according to Cardinal Dolan, despite such issues that have cropped up in the half-century since.

Those issues include the Catholic Church’s old Good Friday prayer about conversion of Jews; the 1987 visit to the Vatican by Austrian President Kurt Waldheim, who reportedly had connections to the Third Reich; questions over Pope Pius XII’s role during the Second World War; Holocaust-denying clerics; furor over the Vatican’s 2000 document “Dominus Iesus”; the content of the Passion Play in Oberammergau, Germany; diplomatic exchanges between Israel and the Vatican; and Pope Francis’ recent overtures to Palestine.

Cardinal Dolan also recalled “the bickering over Mel Gibson’s movie ‘The Passion of the Christ,'” and charges of anti-Semitism leveled at it. “We are family. We argue. That’s what family is all about,” he added. “We raise our voices when we get scared.”

There are five areas of common concern that could be addressed through further dialogue, suggested Cardinal Dolan, the Catholic co-chair of the church’s dialogue with the National Council of Synagogues.

First on the cardinal’s list was an “intensification” of efforts to “reclaim the primacy of God in a world prepared to not take him seriously.” This he said, was at the core of St. John Paul II’s post-“Nostra Aetate” efforts. But the Polish-born pope died seeing “not much progress” in this field, Cardinal Dolan said.

He proposed to leverage “the friendship inspired by ‘Nostra Aetate’ to explore the pastoral issues that befuddle both of us,” among them the reality of Jewish-Christian intermarriage, teaching children the faith, preserving the Sabbath and having “timely and relevant liturgies.”

Cardinal Dolan remembered commiserating with one rabbi who had performed a bar mitzvah and later told the prelate that he wasn’t likely to see the young man for 20 years until such time as he had a son of his own who needed a bar mitzvah. To laughter from the audience at the forum, held at The Catholic University of America in Washington, the cardinal said he told the rabbi, “We have the same problem. We call it the sacrament of confirmation.”

Third on Cardinal Dolan’s list was confronting the loss of members, which he called “a juicy challenge,” adding, “The most towering pastoral problem we face together is America itself, which stresses personal choice on everything.”

Religious persecution also made Cardinal Dolan’s checklist, saying that Jewish and Christian minorities throughout the world are ‘in the crosshairs of the rifle scope of extremists.”

His last item was “sin and redemption,” saying, “That’s the Christian and Jewish vocabulary. That’s what the saints and the prophets have proclaimed,” but that clergy fail to preach on it. Catholics, the cardinal asserted, are “hearing at Mass a version of the discredited I’m-OK-you’re-OK theory of three decades ago.”

Rabbi Noam E. Marens, director of interreligious and intergroup relations for the American Jewish Committee, in a formal response to Cardinal Dolan’s remarks, noted how the AJC itself had a “notably restrained” reaction when “Nostra Aetate” was approved at Vatican II in mid-October 1965. Leaders at the time said they “regret keenly” changes and omissions in the final draft of the text that was approved.

However, after its official promulgation Oct. 28 that year, Jewish enthusiasm was “unhindered” by any previous disappointments that had been expressed, Rabbi Marens added, as the AJC hailed “Nostra Aetate” as a “turning point” and a “new era” in Catholic-Jewish relations.

While the AJC archives did not indicate what brought about this turnaround in less than a month’s time, Rabbi Marens said it may have come simply from “not making the perfect the enemy of the good.” Subsequent dialogues and papal teaching have further eased Jews’ concerns.

“We have come a long way in 50 years,” he added. ‘If there is any keen regret, it has certainly disappeared by now.”