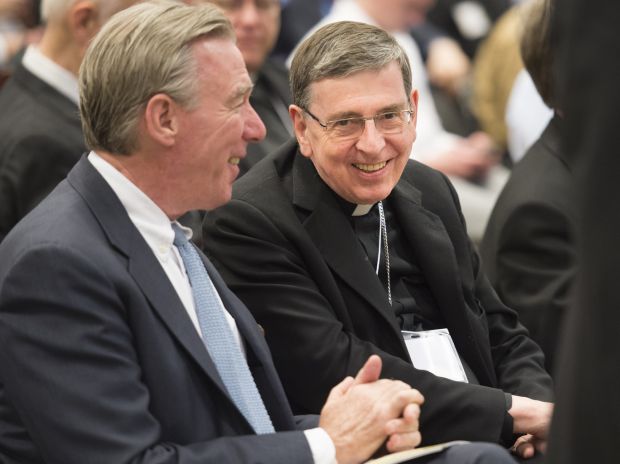 Swiss Cardinal Kurt Koch, president of the Pontifical Council for Promoting Christian Unity, center, smiles alongside John Garvey, president of The Catholic University of America at the university in Washington May 19. They attended "Nostra Aetate: Celebrating Fifty Years of the Catholic Church's Dialogue with Jews and Muslims, a three-day symposium of scholars, which the cardinal addressed May 20. (CNS photo/Ed Pfueller, Catholic University of America)

WASHINGTON (CNS) — A key turning point in the relationships between Catholics and Jews occurred 50 years ago with the Second Vatican Council document on interreligious relations, a cardinal and rabbi told a group of religious leaders May 20.

The document, “Nostra Aetate,” promulgated Oct. 28, 1965, by Blessed Paul VI, was described by Cardinal Kurt Koch, president of the Pontifical Council for Promoting Christian Unity, as “the compass of reconciliation between Jews and Christians today and into future.”

Rabbi Irving Greenberg, author and scholar, praised the document for its courageousness, saying its authors had to “override church fathers.”

The two religious leaders spoke at a conference marking the historic document’s 50th anniversary at The Catholic University of America in Washington. The event was co-sponsored by the university’s School of Theology and Religious Studies and the U.S. Conference of Catholic Bishops’ Secretariat for Ecumenical and Interreligious Affairs.

Both leaders spoke of the long relationship between the two faiths, obstacles they have faced and ways to move forward.

Cardinal Koch stressed that the Catholic Church “has a unique and distinctive relationship with Judaism that is has with no other religion and it cannot understand itself without reference to Judaism.”

He said St. John Paul II expressed this idea clearly in his 1986 visit to a Roman synagogue where he said: “The Jewish religion is not extrinsic to us but in a certain way is intrinsic to our own religion. With Judaism therefore we have a relationship which we do not have with any other religion. You are our dearly beloved brothers and, in a certain way, it could be said that you are our elder brothers.”

That shared relationship is the “essential heart” of “Nostra Aetate,” Cardinal Koch said.

Rabbi Greenberg similarly spoke of the common threads in Judaism and Catholicism pointing out that the two faiths believe humanity was created by God who sustains and loves the world and its inhabitants.

These faith views diverge with the “ongoing conflict of the role and nature of Jesus,” he said, noting that Christianity teaches that God sent Jesus to the world to repair it and Judaism believes the Torah can fulfill that task.

This fundamental difference, he said, led to the conclusion by members of both faiths that “nothing good could be learned” from each other.

That reaction he said, “took a terrible spiritual toll” and both religions paid “a huge price,” the rabbi said.

He said this misunderstanding reached its peak in the Shoah.

Cardinal Koch likewise said the relationship between Jews and Catholics had deteriorated over the years and the sense of “belonging to the same family was gradually lost.” He said the Holocaust was a point when hostility toward Jews “reached its lowest possible nadir” and must be judged “as the most horrific expression of that primitive racist anti-Semitism of the Nazi ideology.”

The cardinal said Nazi views were “fundamentally alien to Christianity” and were “repeatedly condemned” by Popes Pius XI and XII.

He said that even though the Holocaust was “led and undertaken by a godless, anti-Christian and neo-pagan ideology,” it still should have stirred among Christians “much more empathetic compassion with the Jews than in fact did come into effect.”

Both men said the efforts of “Nostra Aetate” began the work of restoring the relationship between the two faiths and set a goal for future generations.

Cardinal Koch said key differences remain, but he noted that if the two faiths are “true to their convictions” and respect and challenge each other they remain linked and can be a help to each other.

Rabbi Greenberg took this point a step further, saying the two faiths “need each other as partners” particularly to address wrongs and offer support to members of the Islamic faith.

“We need to show that in humility we can work together and be an extraordinary witness,” he said.