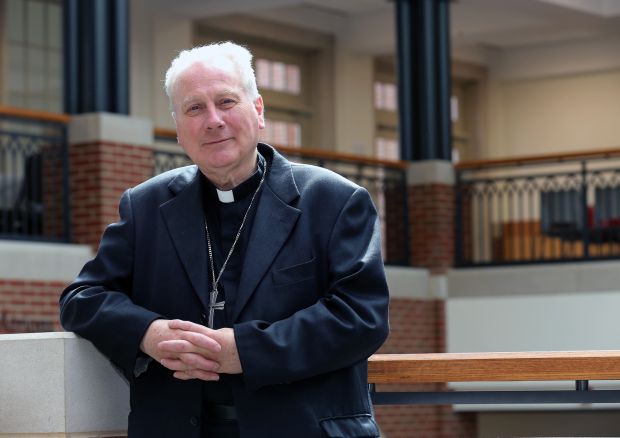 Archbishop Michael L. Fitzgerald, shown on the campus of John Carroll University in suburban Cleveland May 13, is one of the Catholic Church's foremost experts on Islam and the Quran. The former president of the Pontifical Council for Interreligious Dialogue has spent much of his 54 years in the priesthood working to improve understanding among people of different faith traditions. (CNS photo/William Rieter)

UNIVERSITY HEIGHTS, Ohio (CNS) — There’s a book that Archbishop Michael L. Fitzgerald believes can inspire Christians to appreciate the God of all creation.

And it’s not just the Bible.

Archbishop Fitzgerald, who retired at the end of 2012 as the papal nuncio to Egypt, said the Quran, with all of its names for God, can help Christians deepen their faith and inspire them to see God in new ways.

Since retiring, the England-born archbishop has been leading retreats on the names of God in Islam and contrasting the same or similar names for God found in the Old Testament and the New Testament.

Archbishop Fitzgerald, who is fluent in Arabic, spent the past eight months finalizing a book on the subject while serving as the Walter and Mary Tuohy chair of interreligious studies and guest instructor at Jesuit-run John Carroll University in suburban Cleveland. He taught a course on the Quran during spring semester, giving Christian and Muslim students the chance to reflect on the teachings of Islam.

He said his aim is to broaden understanding among people of different faiths, much as it was when he taught at the Pontifical Institute for Arabic and Islamic Studies in Rome, his time as a missionary priest in Sudan, his 19 years as secretary and then President of the Pontifical Council for Interreligious Dialogue and as nuncio during Egypt’s Arab Spring.

The archbishop’s work is rooted in “Nostra Aetate” (“In Our Time”), the Second Vatican Council’s declaration on relations with non-Christian religions promulgated by Blessed Paul VI in 1965.

Understanding and accepting people of other faith traditions and their religions “is what we are supposed to be as church,” Archbishop Fitzgerald told Catholic News Service May 15 in an interview on the John Carroll campus as he was ending his time at the university.

“This is what we are supposed to be as church. I think you come back to ‘Lumen Gentium’ (Vatican II’s Dogmatic Constitution on the Church), the church is the nature of a sacrament. It is a sign of what God is doing. And God doesn’t only work in the Catholic Church. God works through the Spirit in other religions as well, and we must be open to that.

“That means we must relate to people. We are not meant to be a club. We are meant to be engaging in relations.”

Zeki Saritoprak, director of the university’s Islamic studies program, has known Archbishop Fitzgerald for more than a decade. He said having the archbishop on campus for eight months has boosted an understanding across religious traditions.

“He would make connections with the biblical sources so non-Muslim students would find their Quranic understanding can resonate with their own teaching,” Saritoprak said.

For Archbishop Fitzgerald, 77, much of his 54 years as a priest has been spent engaging in interreligious relations. His most high profile work occurred from 1987 to 2006 with the pontifical council, first as secretary for 15 years and then as president for nearly four years.

He landed at the council because of his knowledge of Islam and his teaching background and experience living, studying and ministering in Tunisia, Uganda and Sudan. However, he said, his life path has been different than he first imagined when he went off to school with the Missionaries of Africa — the White Fathers — at age 12 in 1949. He originally thought he would eventually serve where members of the order had traditionally served: West Africa, East Africa or in sub-Saharan countries. Along the way, Arab North Africa piqued his interested and eventually he was sent to Tunisia to study theology for four years.

In Tunisia, he took the opportunity to study Arabic. Several years after his 1961 ordination as a priest of the missionary order, he earned a degree in Arabic at the University of London.

Archbishop Fitzgerald subsequently was assigned to teach Arabic at the Pontifical Institute for Arabic and Islamic Studies and then was a lecturer in religious studies at the Makerere University in Kampala, Uganda, where he taught courses on Islam to Muslim and Christian students. He returned to the pontifical institute in Rome after two years and was named director in 1972. In 1978, he returned to Africa to minister in parish work in northern Sudan.

In 1980, he was elected to his order’s general council, serving for six years.

His experience has made him one of the Catholic Church’s foremost experts on Islam and the Quran.

As secretary of the Pontifical Council for Interreligious Dialogue, Archbishop Fitzgerald worked with Cardinal Francis Arinze and focused on building stronger ties and understanding with leaders and those who practiced different religions.

“We had visits from people all around the world, and we conceived our work as also giving this message that the church must be engaged with people of other religions. So it was encouraging others churches to open up. That meant going around to different places, accepting invitations, sometimes organizing things ourselves,” the archbishop recalled.

He was ordained a bishop in 1992 and became archbishop in 2002 when he became president of the pontifical council after Cardinal Arinze was named prefect of the Congregation for Divine Worship and the Discipline of the Sacraments.

At one point at the congregation, he spent a month living in a Buddhist monastery in Japan as part of an interreligious exchange. On a holiday in India, he and a friend explored key sites of Hinduism. “That was also getting the feel of the religion rather than just studying it through books,” he said.

In February 2006, he became nuncio to Egypt and served as the Holy See’s representative to the Arab League. He witnessed the uprising of the Egyptian people in 2011 and retired at age 75 at the end of 2012 as the country struggled with establishing a new form of government.

As his time wound down at the university, Archbishop Fitzgerald was preparing to return to Jerusalem, where he is assigned to the Missionaries of Africa community based at the Crusader-era St. Anne’s Church in the Old City. The 21 White Fathers there welcome pilgrims. He also teaches courses on the Bible mainly for African priests, men and women religious and missionaries and occasionally speaks on Islam.