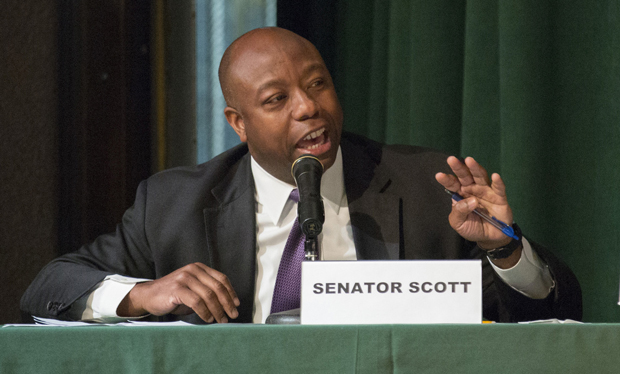 Republican Sen. Tim Scott of South Carolina talks about his own education and his support for reauthorizing funds for a scholarship program benefiting low-income students in the District of Columbia. Scott spoke May 14 at a House committee hearing held at Archbishop Carroll High School in Washington. (CNS photo/Jaclyn Lippelmann, Catholic Standard)

WASHINGTON (CNS) — Hundreds of students at Archbishop Carroll High School in Washington witnessed the federal government at work when a hearing on the reauthorization of the Scholarships for Opportunity and Results Act was held in their auditorium.

Supporters described it as a needed initiative that has given low-income families the ability to send their children to a school that best fits the child’s needs.

The D.C. Opportunity Scholarships Program was created in 2004 and reauthorized in 2011 through the SOAR Act, as the legislation is called. Since the program was created, about 6,000 students in the District of Columbia have received the scholarships.

The SOAR Act provides equal funding for a federal initiative that includes public schools in the District of Columbia, charter schools and the district’s scholarships program.

In 2014, 89 percent of the scholarship program’s students graduated from high school, compared to the 58 percent graduation rate at the district’s public schools, said Rep. Jason Chaffetz, R-Utah, who is chairman of the House Committee on Oversight and Government Reform.

On average, 92 percent of the scholarship program’s graduates go on to colleges or universities.

Shirley-Ann Tomdio, a recipient of an opportunity scholarship, was among those who testified at the May 14 hearing, which convened by Chaffetz’s committee. She said that being able to go to a high-quality school of her family’s choosing made all the difference in the world.

“Every child should have the chance to receive a quality education, because at the end of the day, we are the future,” said Tomdio, a graduate of Sacred Heart School and Georgetown Visitation Preparatory School in Washington. “We want to grow up in a world knowing that our lives are secure and that we can be successful, because our education was never limited — by our backgrounds, traditions, race or socioeconomic standings.”

A mother of a scholarship recipient, Seferash Teferra, testified that her daughter Yalemwork was not being adequately challenged at her public charter school but has since found a wonderful home at the private Sidwell Friends School.

“Honestly I believe that the sky is the limit regarding Yalemwork’s future, thanks to the help of the OSP. Her attending Sidwell has allowed her to realize her full potential and allowed her passions to flourish,” said Teferra. “I cannot believe there are some people who do not support this program and would doubt its ability to help families choose a path best suited to their individual child’s education.”

Del. Eleanor Holmes Norton, D-District of Columbia, commended parents for fighting for their children, but said she still opposed the program, saying that Americans have a right for their tax dollars to go toward publicly accountable public schools.

As someone who almost dropped out of high school, Sen. Tim Scott, R-South Carolina, who spoke at the request of Chaffetz, said he knows how critical it is for students to be in a school where they can succeed. “The focus on blues and reds is the wrong focus; the focus has to be on the kids,” he said.

Dominican Sister John Mary Fleming, executive director of Catholic education for the U.S. Conference of Catholic Bishops, called the hearing “a welcome first step in highlighting the transformative influence that parental choice can have in providing opportunities for students and their families.”

“The Catholic Church has unequivocally taught that parents have the right and responsibility to serve as the primary educators of their children,” Sister Fleming said in a statement released the day of the hearing.

“As the Second Vatican Council taught in its Declaration on Christian Education, ‘Gravissimum Educationis,’ parents have the primary and inalienable right and duty to educate their children and must enjoy freedom in their choice of schools,” she said.

In a March 30 letter, Archbishop George J. Lucas of Omaha, Nebraska, chairman of the USCCB Committee on Education, wrote to House and Senate appropriators urging them to support the full authorized funding of $60 million in the appropriations bill for fiscal year 2016.