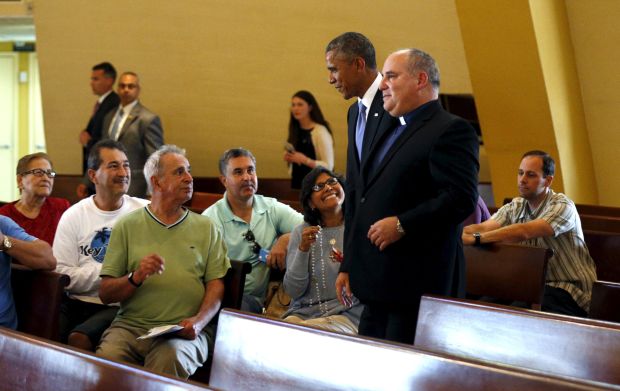 U.S. President Barack Obama makes an unannounced stop to the Shrine of Our Lady of Charity in Miami, Florida May 28. Walking with the president is Father Juan Rumin Dominguez. The shrine is named for the patroness of Cuba and the Cuban people. (CNS photo/Kevin Lamarque, Reuters)

MIAMI (CNS) — The priest prayed an Our Father. The president lit a candle. And while gazing together at a revered image of Cuba’s patroness, the priest reminded the president of the suffering of Cuba’s people.

“Only in the United States that’s possible,” said Father Juan Rumin Dominguez, rector of the National Shrine of Our Lady of Charity in Miami, as he recalled the whirlwind, completely unexpected visit of President Barack Obama early in the afternoon of May 28.

The president was on his way to the airport after attending a Democratic fundraiser the night before and spending the morning at the National Hurricane Center.

“For me it was an honor and a sign that we live in a free country,” said Father Dominguez, himself a Cuban exile. “To be able to tell President Obama to his face about the feelings of thousands of people who visit the shrine every day.”

The shrine is a symbol of faith and hope for Cuba’s exiles since before their donated pennies paid for its construction in the early 1970s; now it is a first stop also for thousands of immigrants from Central and South America who continue arriving in South Florida.

Obama is the first sitting U.S. president to visit. And Father Dominguez had barely an hour to prepare. He was in a meeting with his staff when Secret Service agents appeared at the office, telling him the president “was nearby and he wanted to get to know this place.”

Within seconds, carloads of SWAT-clad agents with bomb-sniffing dogs descended on the shrine, quickly and efficiently checking “every corner, every crevice, every door,” Father Dominguez said.

He asked if he should tell the dozen or so people praying inside to leave. The agents said no. They just had to be screened with metal detectors. A few minutes later, Father Dominguez was standing at the glass doors of the shrine, waiting to welcome the leader of the free world.

They walked inside, and with Cristina Brito, Father Dominguez’s secretary, serving as translator, the priest told the president the history of the place.

“I showed him the image of Our Lady of Charity, the one that arrived here in 1961,” the priest said.

He told him of the outdoor Mass that year, where more than 30,000 newly arrived exiles had gathered. “They felt sad, forsaken, they missed their homeland. They had come searching for liberty and at that moment, the image of the Virgin was brought in, a sign that they were not alone.”

“He was really paying attention,” Father Dominguez recalled. “He asked me if it was the original (image).”

The priest explained that the original remains at its shrine in El Cobre, in Santiago de Cuba.

“I also explained to him the history of Cuba,” he said, a history depicted in the mural located behind the shrine’s altar.

“He recognized Father Felix Varela and also Jose Marti,” Father Dominguez recalled, referring to two of the faces on the mural. One is of the priest who wound up ministering to Irish immigrants in New York after being exiled for demanding independence from Spain; the other is of the Cuban poet who died while fighting for the same cause.

Then the priest pointed out the faces at the bottom right of the mural: Cuban rafters.

“There I took the opportunity to explain to him the tragedy of the Florida Straits,” Father Dominguez said. “I told him: Look, that image represents Cubans who, since communism came to Cuba, have been coming and losing their lives in the Florida Straits, looking for liberty. I hope all that effort won’t be lost, and that this process (of reconciliation between the two countries) will conclude with true freedom for Cuba.”

Not content to say it only in Spanish, Father Dominguez said he repeated: “Mr. President, I have some difficulties in explaining myself in English. But I can say to you something very clear. We pray every day here for real freedom, real freedom, for Cuban people, for Cuba.

“Then he smiled and he told me, ‘Father, don’t worry, that is our goal, to achieve liberty in Cuba.'”

Father Dominguez said he conveyed the feelings of many in the exile community who are wary of the current negotiations because they believe “this is all about economic interests,” and human rights are being cast aside.

He said President Obama assured him that “the topic of freedom for Cuba and human rights will always be on the negotiating table with Raul Castro.”

Father Dominguez said he reiterated his desire that the Cuban people will soon enjoy “those same rights we enjoy here in the U.S.”

That’s when, together, the priest, the president and Brito prayed the Our Father. Then the president “lit a candle in front of the Virgin,” Father Dominguez said, and stood for a minute in silent prayer.

As for the faithful gathered there, the priest noted, “There was total silence in the shrine.”

He also pointed out the seawall — “malecon” in Spanish — built behind the shrine, which sits on the edge of Biscayne Bay. The wall is a small-scale replica of Havana’s famous “malecon.”

“Perhaps someday soon you will be able to see the original one,” Father Dominguez told the president. “I hope,” he said the president responded.

Looking back on the moment, Father Dominguez seemed clearly amazed. “Only in the United States that’s possible,” he repeated in accented English. “Incredible, incredible. Only in this country.”