LCWR goes on ‘with our normal life’ after mandate ends, official says 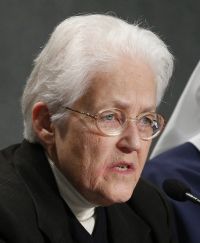 Sister Sharon Holland, president of the Leadership Conference of Women Religious, is pictured in 2014 at the Vatican. (CNS photo/Paul Haring)

WASHINGTON (CNS) — The president of the Leadership Conference of Women Religious said the organization is pleased to be “going on with our normal life, so to speak,” now that the Vatican’s mandate to reform the group has concluded.

Sister Sharon Holland told Catholic News Service that the leaders of the organization and Vatican officials reached agreement on several key issues under a mandate for reform issued by the Congregation for the Doctrine of the Faith in an atmosphere that promoted understanding and respect.

The mandate emerged from a doctrinal assessment by congregation representatives that began in 2009.

“The whole experience has allowed us to see the fruitfulness of a process that was carried out in a sort of contemplative way,” said Sister Sharon, vice president of the Sisters, Servants of the Immaculate Heart of Mary in Monroe, Michigan. “It takes time to be quiet, to pray and reflect. We’ve seen both the power and the potential of respectful honest dialogue. We hope that we’ve all learned a good deal about the importance of listening well.

“Hopefully we’ve both experienced and shown the possibility of dealing with tension or misunderstanding or difficulties in a way that helps resolve, rather than allowing them to develop into polarization,” she added.

Both parties released a two-page Joint Final Report the same day that outlined several reform steps already completed or that were to be undertaken by LCWR. Both also agreed to a 30-day moratorium for comment.

No immediate word was released by the Vatican May 15.

In a statement posted on the LCWR website May 15, the organization’s leadership said that when the findings of the assessment were issued in 2012, its board of directors decided to place all discussions in a context of communal contemplative prayer in order to discern how best to respond.

The statement was issued by Sister Sharon as president; Sister Marcia Allen, a member of the Congregation of St. Joseph, president-elect; Sister Carol Zinn, a Sister of St. Joseph, past president; and Holy Cross Sister Joan Marie Steadman, executive director.

The assessment of LCWR, whose 1,500 members represent 80 percent of the 57,000 women religious in the United States, was initiated after complaints were lodged by unnamed U.S. Catholic leaders.

Led by Archbishop Leonard P. Blair of Hartford, Connecticut, the assessment took three years to complete. Citing “serious doctrinal problems which affect many in consecrated life,” the Vatican announced a major reform of the conference in 2012 to ensure their fidelity to Catholic teaching in areas including abortion, euthanasia, women’s ordination and homosexuality.

Archbishop J. Peter Sartain of Seattle was appointed to oversee the reform. Bishop Thomas J. Paprocki of Springfield, Illinois, and Archbishop Blair were named to assist him.

The LCWR leadership in its statement said all interactions with the Vatican’s Congregation for the Doctrine of the Faith the U.S. prelates “were always conducted in a spirit of prayer and openness.”

The leadership team credited Archbishop Sartain for his “sincerity and integrity” for encouraging the organization to continue in dialogue over the findings of the assessment.

“We engaged in long and challenging exchanges with these officials about our understandings of and perspectives on critical matters of faith and its practice, religious life and its mission, and the role of a leadership conference of religious,” the statement said. “We believe that because these exchanges were carried out in an atmosphere of mutual respect, we were brought to deeper understandings of one another. We gained insights into the experiences and perspectives of these church leaders, and felt that our experiences and perspectives were heard and valued.”

The statement also said that preparation for meetings with church officials was time consuming and “at times difficult.”

“The choice to stay at the table and continue dialogue around issues of profound importance to us as U.S. women religious had its costs. The process was made more difficult because of the ambiguity over the origin of the concerns raised in the doctrinal assessment report that seemed not to have basis in the reality of LCWR’s work. The journey in this unchartered territory at times was dark and a positive outcome seemed remote,” the LCWR leadership said.

The Joint Final Report outlined several steps that had already been completed or that were to be undertaken by LCWR. They included a change in one of the organization’s governing statutes, an agreement that its publications will be reviewed to “ensure theological accuracy,” and that programs sponsored by the conference and speakers chosen for its events will be expected to reflect church teaching.

In addition, the report said the bishops and LCWR leaders had “clarifying and fruitful” conversations about “the importance of the celebration of the Eucharist; the place of the Liturgy of the Hours in religious communities; the centrality of a communal process of contemplative prayer practiced at LCWR assemblies and other gatherings; the relationship between LCWR and other organizations; and the essential understanding of LCWR as an instrument of ecclesial communion.”

Sister Sharon explained that some of the concerns raised by the Vatican were being addressed by LCWR even as the discussions continued.

For example, she cited review of the organization’s publication as a positive step because “we want the highest quality of publication we can have.”

“I’m very hopeful for our relations going forward,” she said. “We’re all trying to build community with the church and one another. That’s the hope.”

The LCWR officials’ statement concluded by saying that they hoped “the positive outcome of the assessment and mandate will lead to “additional spaces within the Catholic Church where the church leadership and membership can speak together regularly about the critical matters before us.”

“The collective exploration of the meaning and application of key theological, spiritual, social, moral and ethical concepts must be an ongoing effort for all of us in the world today,” especially in a period of change in a world “marked by polarities and intolerance of difference,” the statement said.

Sister Sharon told CNS the reform effort and its outcome will be discussed at LCWR’s annual assembly in Houston Aug. 11-15.

PREVIOUS: Number of Americans with no religion is rising, survey says