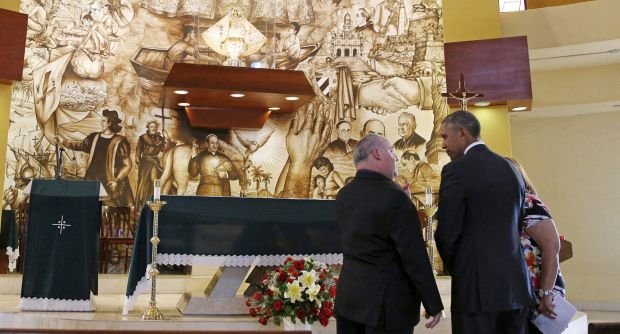 U.S. President Barack Obama makes an unannounced stop to the Shrine of Our Lady of Charity in Miami May 28. Standing with the president is Father Juan Rumin Dominguez. The shrine is named for the patroness of Cuba and the Cuban people. (CNS photo/Kevin Lamarque, Reuters)

MIAMI (CNS) — Those who know Cristina Brito — or follow her Facebook postings — know that she is not a fan of President Barack Obama. Nevertheless, she said after meeting him May 28, “I feel very happy. Very emotional.”

Brito has served as secretary to the rector of the National Shrine of Our Lady of Charity in Miami for the past 11 years, working first for Auxiliary Bishop Agustin Roman, and since his death for his successor, Father Juan Rumin Dominguez.

She served as translator for Father Dominguez during the 15 minutes or so Obama spent at the shrine. And even though their politics are diametrically opposed, “to meet a U.S. president is a very big deal,” she told the Florida Catholic, Miami’s archdiocesan newspaper.

He even hugged her as she stretched out her hand to say goodbye. All in all, it was “very impressive but very emotional, really, a very emotional day.”

That made the meeting with the president even more significant.

“I was very happy that Father (Dominguez) was able to say what he said, what he feels,” said Brito, “because truly that’s what we pray for here at the shrine every day — for the liberty of Cuba, for justice, for human rights.”

“It’s a blessing that he visited us and that he got to learn more about us,” she added. “We just ask Our Lady of Charity to truly make this visit fruitful, to truly make Cuba free.”