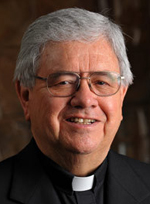 SOUTH BEND, Ind. (CNS) — Father Virgilio Elizondo, founder of the Mexican American Cultural Center in San Antonio and a theology professor at the University of Notre Dame, has been accused of sexually abusing an unidentified boy more than 30 years ago in a lawsuit filed against him, the San Antonio Archdiocese and a former priest.

The lawsuit, filed May 22 in Bexar County District Court in San Antonio, alleges that a boy listed as John Doe was sexually abused by a former priest, Jesus Armando Dominguez, while he was living in an orphanage and was a student at Assumption Seminary. According to The Associated Press, the boy was allegedly sexually abused again when he reported the incidents to Father Elizondo. The lawsuit seeks unspecified damages.

A spokesman for the San Antonio Archdiocese told Catholic News Service May 28 that the archdiocese declined to comment on the case because it had not been served the lawsuit.

The former priest accused of abuse was ordained for the Diocese of San Bernardino, California, the spokesman said.

An email from a Notre Dame spokesman said the university was “reserving comment until further inquiries are completed,” adding that school had only became aware of the allegation after it was reported by a local television station.

Father Elizondo did not respond to an email from CNS seeking comment.

The priest is currently a professor of pastoral and Hispanic theology at Notre Dame and is widely recognized as the father of U.S. Latino religious thought. He has pursued scholarly work in theology, evangelization, faith and spirituality, culture and public ritual.

He was an advocate for underpaid and exploited Mexican-American laborers in the Archdiocese of San Antonio during the early 1970s. Father Elizondo has been active in television work and video productions and is considered the foremost interpreter of U.S. Latino religion by the national and international media.

As pastor of the San Fernando Cathedral in San Antonio, he presided over a Sunday Spanish Mass that was broadcast to more than 1 million households.

A native of San Antonio and the son of Mexican immigrants, Father Elizondo was ordained a priest for the Archdiocese of San Antonio in 1963. He joined the Notre Dame faculty in 2000 and has written several books, including “The Future Is Mestizo,” “Galilean Journey” and “The Human Quest.”

NEXT: Events planned nationwide for Fortnight for Freedom